A wet afternoon made for a slippery occasion in Round 14 of the Gallagher Premiership as the Blue, Black and White welcomed Newcastle Falcons to The Rec.

Looking for a much needed win, Bath showed their intent from the start and delivered a hard-fought game of rugby against a tough Newcastle side.

Tries from Ollie Lawrence, Ted Hill and Ben Spencer, and a pin point accurate boot from Orlando Bailey, gave Bath a 24-16 win in front of a jubilant crowd.

Johann van Graan made four changes to his side that took on Exeter Chiefs last week, for what was Bath Rugby's final run out of 2022.

England U20 hooker John Stewart replaced a yellow-carded Annett for his Premiership debut, and Chris Cloete entered the field for the second half after a lengthy recovery from a broken foot.

A milestone for the opposition came in the form of Falcons tighthead Trevor Davison running out for his 100th appearance for Newcastle.

The heavens poured as the game got underway at The Rec in front of a sold-out crowd.

Winning successive penalties in the opening five minutes, Bath claimed a five-metre shot at goal against a strong Newcastle defence. Able to clear themselves of the immediate threat, Falcons cinched a crucial penalty on their goal-line and rid the ball out into the stands to relieve the pressure.

Bath's next attacking opportunity came as Orlando Bailey kicked a penalty just outside the Falcons' 22. With the pitch resembling a slip and slide after a severe West Country downpour, it was Lawrence who capitalised on a Falcons fumble and slid over with the ball firmly in hand for Bath's first points of the game. Successfully converted by Bailey, Bath took a 7-0 lead.

In a Falcons phase of attack, Bath were called off their feet and gave the opposition the opportunity to nudge three points onto the scoreboard through the boot of Brett Connon.

Camping down in the corner of the Bath 22, repeated infringements on the line saw Annett sent to the bin. Falcons continued their attack and took away a full seven points using their extra-man advantage to take the lead 10-7.

A temporary switch from line-out caller to line-out thrower saw Dave Attwood make a cameo at hooker to launch a short-ball to Hill in the line-out.

The duo tag-teamed once again to miraculously hold up Gary Graham over the line to save Newcastle from scoring their second.

JP Ferreira's defence came into play once again in the closing minutes of the half as Falcons hammered on the Bath try-line. Earning a crucial penalty, Bath survived the assault and it was recent centurion Josh Bayliss who earned the pat on the back from his captain after making an all important turnover.

Sending the ball into the stands, captain Spencer called time on the half and sent the teams into the sheds to dry off.

With the rain persisting, Bailey got the game back underway and saw a return for Cloete who had been on a lengthy sideline spell after breaking his foot at the beginning of the season.

Kicking a three-point penalty in the opening minutes of the second forty, Newcastle nudged their lead on.

Fighting back to close the points deficit, Lawrence danced his way into space to give Bath solid field position. With Newcastle receiving a yellow in front of the posts, Bath made the most of their extra man and Hill bouldered his way over the line to give the hosts the lead after Bailey's successful conversion.

After a slow down in play, Bath spiced things up again by delivering another crucial turnover in prime field position. Roared on by The Rec faithful, Spencer hurled himself over the line in what was to be Bath's third score after a check from the TMO. Converted by Bailey, Bath sat eight points ahead.

Emptying the bench of impact players, the likes of Miles Reid and Will Spencer added a fresh insurgence of power to the game and forced errors from the Falcons to kill their momentum.

With a last gasp attempt at a penalty to earn a losing bonus point, Connon sent the ball wide of the posts, much to the delight of the south stand.

In a gutsy and synchronised performance from the team, Bath took away four points as jubilation spread around The Rec.

pol roger performance of the match 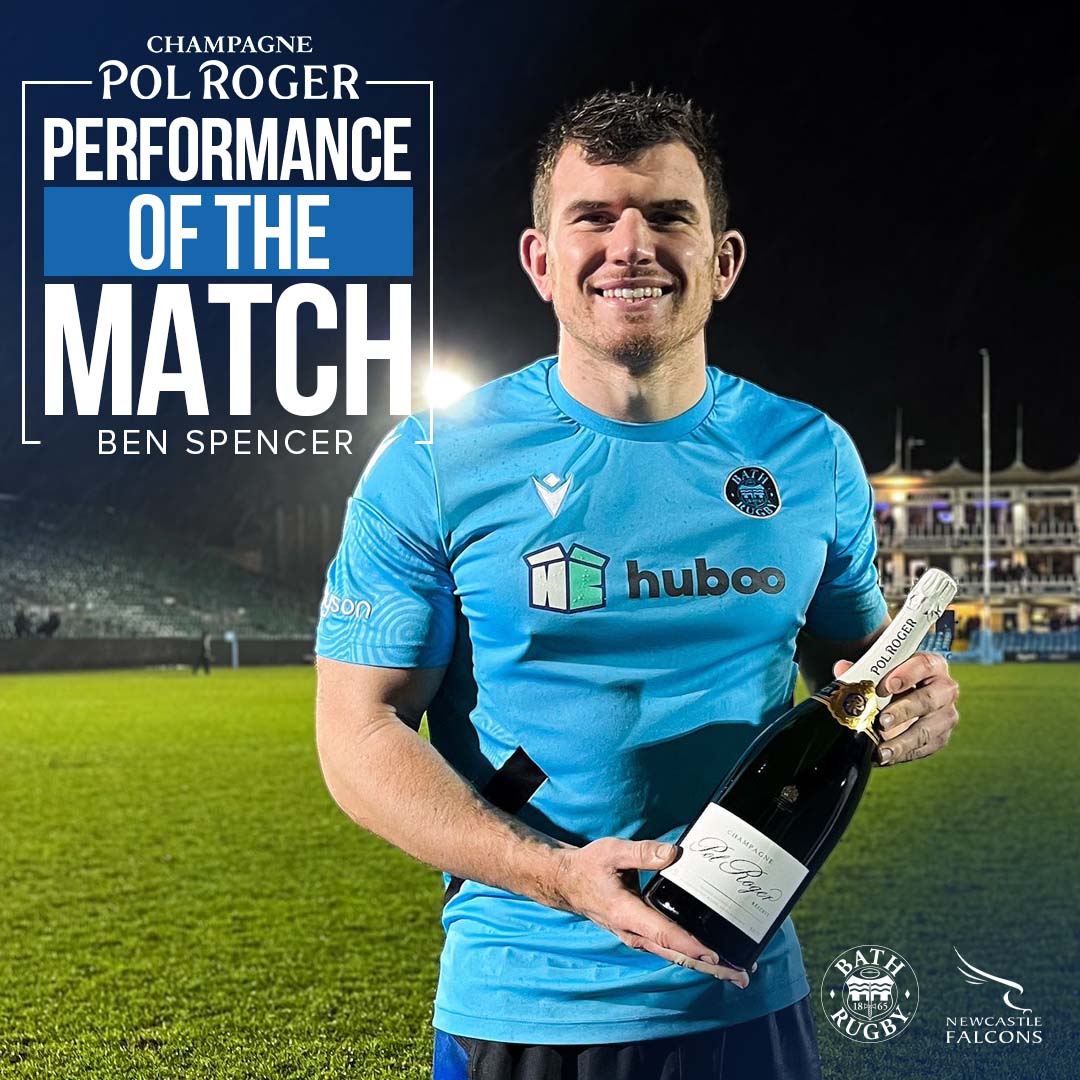