Played at Gloucester’s Kingsholm following Saturday’s postponement, the visitors got off to the perfect start with a penalty try and Thomas Salles added a second following an Orlando Bailey penalty.

Matt Gallagher grabbed a try on 33 minutes and after Cheslin Kolbe raced in for a third Toulon try, the Bath full-back crossed for his second.

A wonder finish from Ted Hill, and Piers Francis’ boot, made things tight late on but Adrien Warion barrelled over late on to put Toulon out of touching distance.

Bath were forced into a late change with Miles Reid coming for an ill Josh Bayliss, adding to three further amendments from the Newcastle Falcons win.

Tom Dunn, Cameron Redpath and Valeriy Morozov were all reinstated to the starting XV.

Toulon got off to the best possible start as referee Chris Busby awarded a penalty try after two minutes. Dany Priso’s jackal earned a turnover from the kick-off and following a strong maul, the Irish official ran under the sticks and gave a yellow card to Dave Attwood.

A seven-point head start was not what Bath needed at their ‘holm away from home but Bailey’s penalty settled things down.

Ollie Lawrence and Joe Cokanasiga carried menacingly on numerous occasions, and Ted Hill did a lot of grunt work. However, Bath were guilty of turning over possession in promising positions.

South Africa wing Cheslin Kolbe was allowed space to run when his side retrieved the ball but as he kicked on, Redpath was on hand to scramble and to put an end to the danger.

Toulon did cross for their second score moments later. Full-back Salles hit the gas and strolled home with Biggar’s boot making it 12-3 to the visitors.

The response from Bath was excellent. At the set piece, the Blue, Black and White dominated at the scrum against the statistically best scrummaging pack in Europe and they were strong at the line-out too.

Cokanasiga was causing havoc with bulldozing runs, though the ball just wouldn’t stick at the final hurdle for Johann van Graan’s men.

They stayed in the fight, were extremely physical and just past the half-hour mark, they were rewarded for their efforts. England international Cokanasiga was again at the heart of a positive attack, storming up the middle and when Ben Spencer dictated play quickly, Lawrence’s neat grubber was pounced upon by Gallagher in the corner.

Despite being up against it, Toulon ended the half with a successful strike at goal from Biggar to give themselves some breathing space on the scoreboard.

Bath started the second half in lively fashion, particularly Ruaridh McConnochie and Hill with the latter almost grazing the whitewash in the opening stages.

A kicking battle ensued thereafter, won by the ‘hosts’ and the front row of Valeriy Morozov, Dunn and D’Arcy got the better of their French counterparts at scrum time, winning several penalty.

Despite their dominance, Bath fell further behind through Biggar and then a quick-thinking attack that saw Kolbe triumph. Jules Danglot tapped and darted off, spotted space in behind for Springbok sprinter Kolbe to chase and he finished comfortably.

Bath were not downhearted. Lawrence and Cokanasiga blasted up the middle and Toulon conceded a close-range penalty whilst under pressure. The old switcheroo, left to right passing, saw Francis send Gallagher over in the corner to boost hopes of a comeback.

Those hopes were enhanced further when Hill produced a try-of-the-season contender. Sent through a hole by Redpath, the England flanker made a 25-metre burst and punted over the top. He got the luck of the bounce to pick up on his toes and stumbled his way to a dive under the sticks.

This gave the Bath fans in attendance much reason to lift their noise levels even more so as they edged to within five points of Toulon.

Biggar and Francis traded penalties in a cagey last 10 minutes, and Cokanasiga looked to have saved Bath’s losing bonus point with a last-ditch tackle on Ihaia West.

However, Toulon pushed on from the five-point gap with the clock in the red with Warion crashing over.

Bath still have everything to play for going into next Friday’s match against Glasgow Warriors.

Pol Roger Performance of the Match 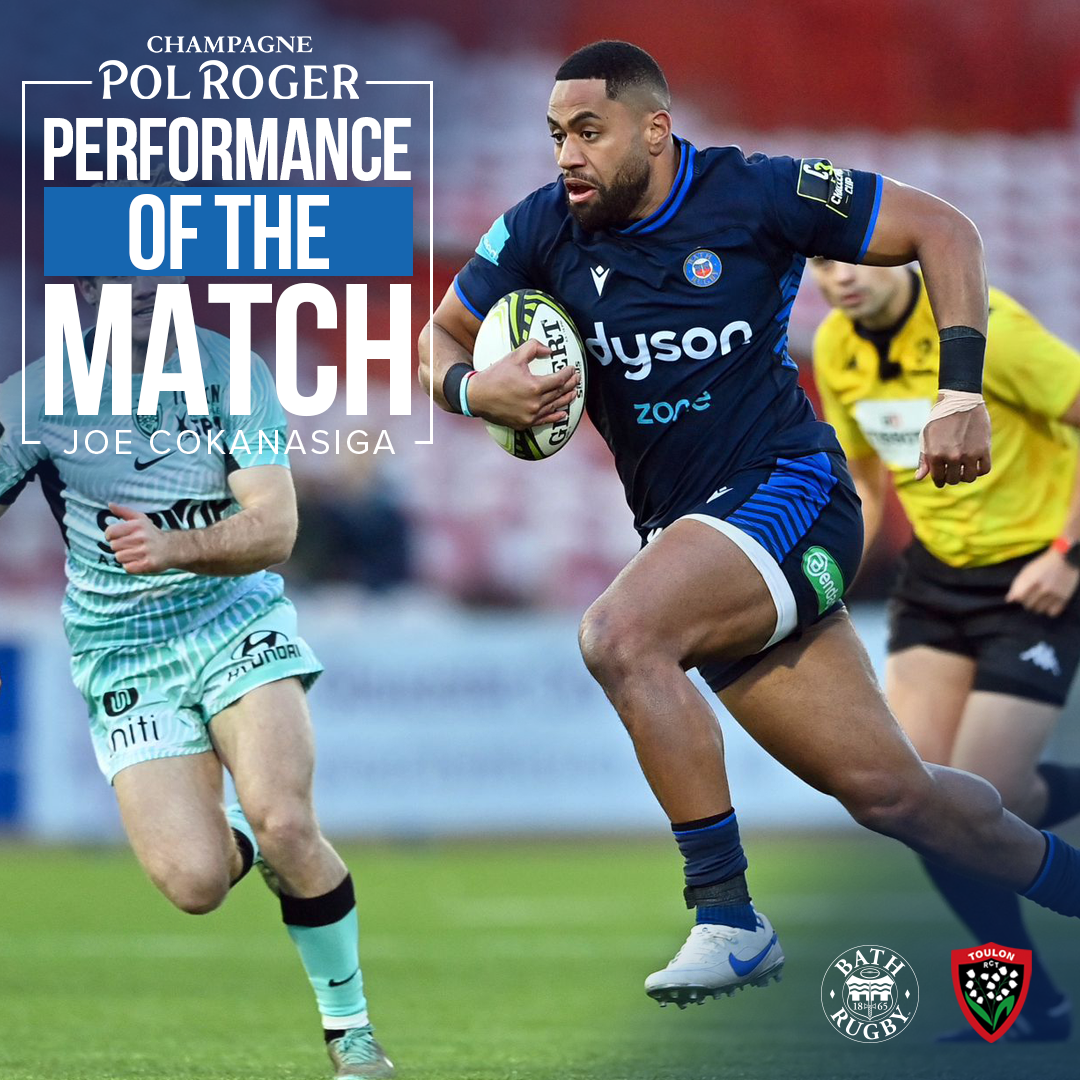