Bath Rugby ended their Gallagher Premiership calendar year with a defeat to Gloucester at the Rec.

Two first-half penalties from Orlando Bailey were cancelled out by a Gloucester penalty try and Chris Harris’ score as Bath went down to 13 players.

Jack Singleton added a third and Harris crossed for a fourth just before the interval.

Ben Spencer’s quick thinking gave Bath a chance of a comeback, but Fraser Balmain and Kyle Moyle confirmed the result late on ahead of Ollie Fox's score.

Five players returned to the starting XV for Bath with Sam Underhill packing down at Number 8 in the absence of Josh Bayliss.

Ruaridh McConnochie and Jonathan Joseph were named in the backfield while Tom Dunn and Mike Williams came back into the pack. The latter moved to the second row with Josh McNally pulling out of the squad on the day – Ewan Richards earned a start at openside flanker.

Gloucester made two late changes to their side with Ollie Thorley replacing Jonny May on the wing and Kyle Moyle coming on to the bench.

Both scrum-halves tested the air waves early on with lofty box kicks and it was a ball with real hang time from Ben Spencer which allowed Semesa Rokoduguni to rise high and claim. A phase later, Bailey was presented with the opportunity of a long shot at goal and duly delivered to make it 3-0.

Adam Hastings missed the chance to level soon after and then Rokoduguni’s monster hit on Lloyd Evans ended any likelihood of the full-back advancing into the corner for Gloucester.

Bath were forced into a change on 11 minutes as Sam Underhill needed a HIA and as the hosts adjusted, Gloucester kept things tight and made serious metres as a result. Looking to go wide, Ben Meehan threw a loose ball which Spencer gathered and cleared. From there, the Blue, Black and Whites hounded their rivals, counter rucking and earning a penalty which saw well away from their own line.

Tom Dunn almost put Spencer in for a one-on-one chance following a beautifully long Bailey punt to touch, however the nine couldn’t quite grasp as Stuart Hooper’s side attempted to add to their three points.

But after being isolated on the halfway line, Bath very nearly fell behind but for the incredible defensive efforts of Lewis Boyce who held up possession over his goal line from a strong Gloucester maul.

The Cherry & Whites did eventually cross the whitewash. Tom Ellis was sin binned for not rolling away and with a man advantage in the pack, the visitors rumbled on and earned a penalty try. Boyce received the yellow card for his actions.

Bailey kept his composure to slot another tee-shot from distance with his team down to 13 but struggling for numbers, Thorley was able to offload and send Harris on a free run for five points.

Rokoduguni made another crucial tackle, again on Evans, to deny Gloucester a third effort on the half-hour mark, though it soon came. Singleton slid in from the back of a maul and Hastings added the extras.

England centre Mark Atkinson was key to Gloucester’s bonus point finish, starting the move was a deft toe to the wing. Louis Rees-Zammit hacked on and Harris was just behind his fellow British & Irish Lion teammate when he began his run to collect.

Academy duo Richards and Max Ojomoh created the spark at the beginning of the second half. After Bath were set for a box kick, they fooled Gloucester and sent Richards barrelling through a gap. He offloaded to Ojomoh and the 21-year-old rampaged plus-50 metres, bumped Jordy Reid and reached the Gloucester 22.

The move didn’t amount to anything substantial, but it was a sign of promise for the home crowd on a cold, wet Boxing Day and another look at the club’s homegrown prospects.

Soon after, Ruaridh McConnochie caused havoc as he came inside and the forwards punched at the Gloucester fringes. Their efforts were rewarded as from a scrum penalty, the quick-witted Spencer recognised the Gloucester players who had turned their backs, found the referee’s mark and made his way under the sticks.

A Will Stuart (yes, that is correct) ambitious kick to the corner set up the platform for Bath to continuously hammer the Gloucester door. George Skivington’s side were able to match the Blue, Black and White’s line speed to thwart any breaks in behind, although they couldn’t quite rid of the danger.

The first-half territory statistics were completely blown out the water by the second as Bath worked unbelievably hard in attack to try and rescue the scoreline. The brilliant Bailey received a ball from the equally impressive Spencer but couldn’t keep his hands on the ball in a double tackle a couple of metres from the line.

Unfortunately, that momentum wasn’t converted into points and on their first trip to the Bath 22, Balmain flopped over and moments later, Moyle was put in by Thorley to seal the result.

Bath did have the last word. Bailey's cute chip was met by Will Butt who cantered deep into the Gloucester 22. Fox picked from the base and made his way over to join scrum-half partner Spencer on the scoresheet. 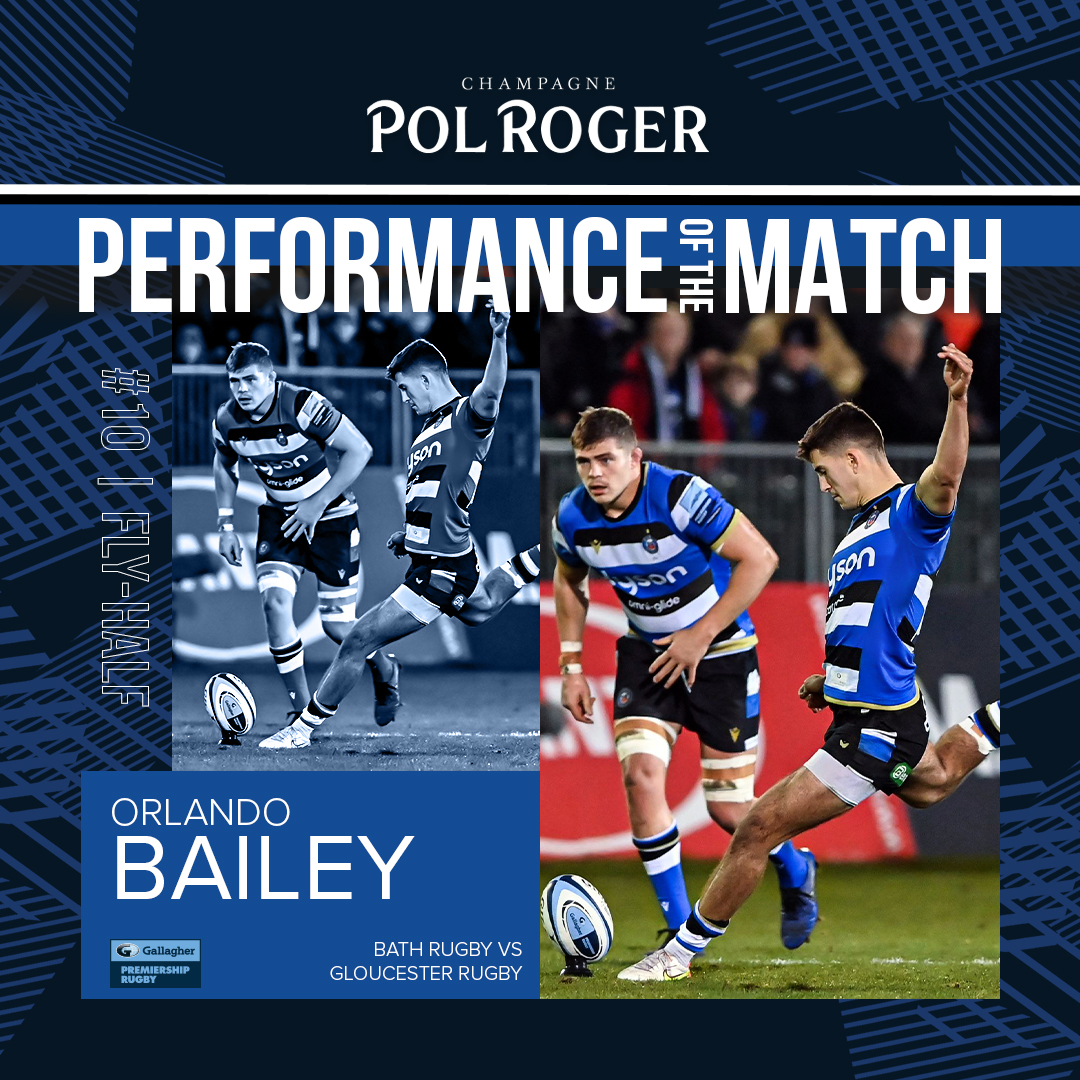