Tom Dunn’s journey to professional rugby hasn’t exactly been a linear one.

Having realised his rugby playing potential as a youngster, Dunn set out on a path to tackle age grade rugby with dreams of making it to the Blue, Black and White and maybe - one day - England.

A Bath native, the hooker tried every which way to move into the professional system, thanks to the unwavering support of his parents.

“I never played age group rugby. I always wanted to. I got into trials for South West, but then didn’t get in at under 16, under 18s and I didn’t get invited to under 20s. That was hard.

“When you’re younger it doesn’t just affect you, it affects everyone. Your parents are driving you around to camps and fixtures and you’re not getting in. It’s hard for them too.” 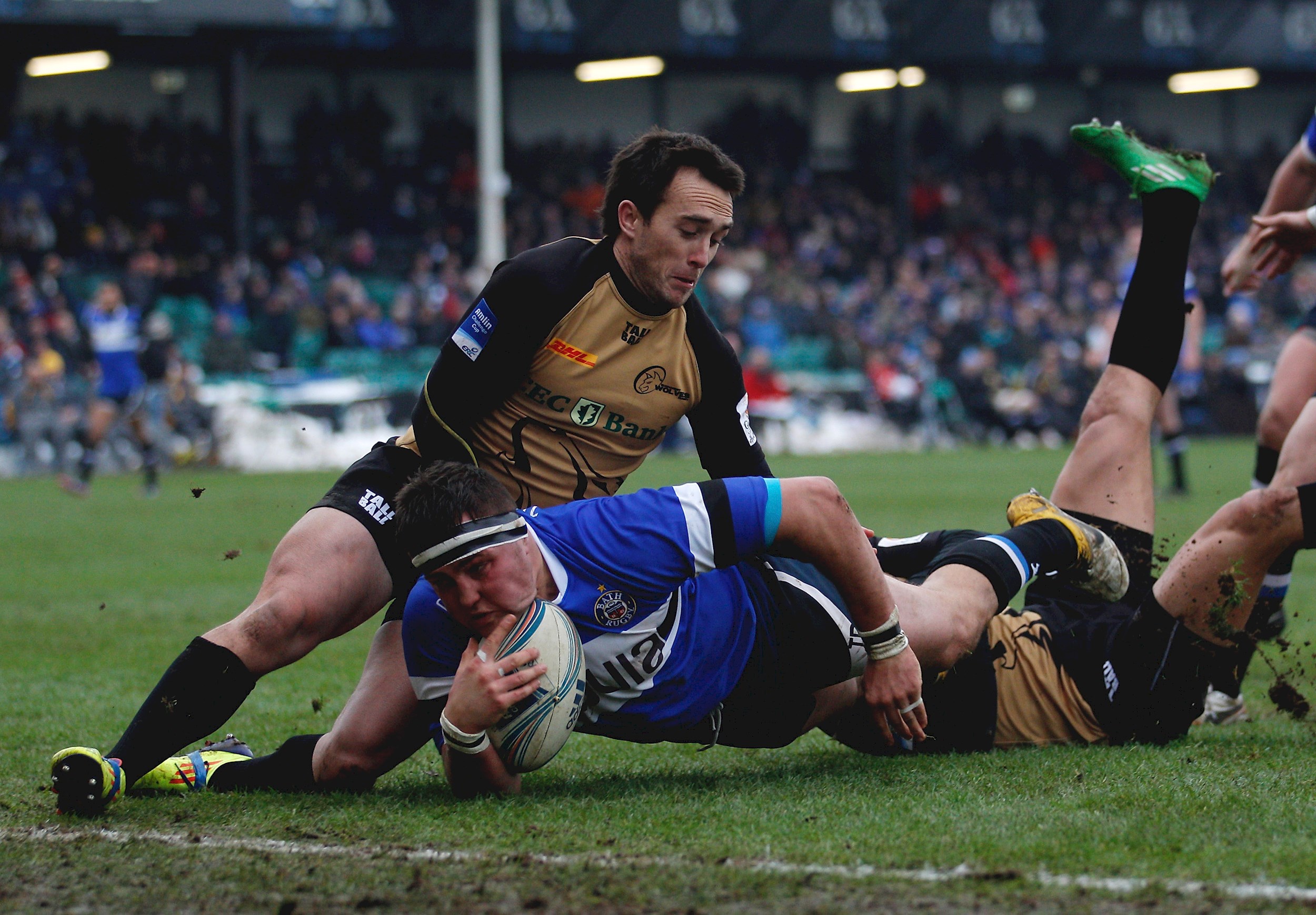 After two years on loan to Chippenham RFC, Dunn’s determination paid off, landing him a full-time position in the Bath Academy squad. Under the stewardship of Neal Hatley and Toby Booth, Dunn reinvented himself, switching from loosehead prop to hooker. Over the course of three seasons, he honed-in on the skills required to take up his new position - and the hard work paid off.

Making his debut for Bath Rugby in December 2012, the University of Bath graduate went on to solidify his place as a regular feature of the West Country first XV. He signed a long-term contract in 2016 and, just one year later, was named in his first England squad. Two subsequent call ups followed in 2018 and 2019, respectively, before securing his first cap in the 2020 Guinness Six Nations against Italy. That moment was met with elation and relief, as Dunn explained:

“I almost felt like a fake before that point” he commented.

“People would say ‘Oh Tom Dunn, the Bath and England hooker’ and I’d kind of be like ‘erm I’m not really an England player…I haven’t actually played’. But that was the impression people had. So it was hugely enjoyable but a relief as well.

“I think because I’d been around the squad for quite a while, people just assumed I had a cap and I hadn’t. So it was a pretty good feeling to get it.” 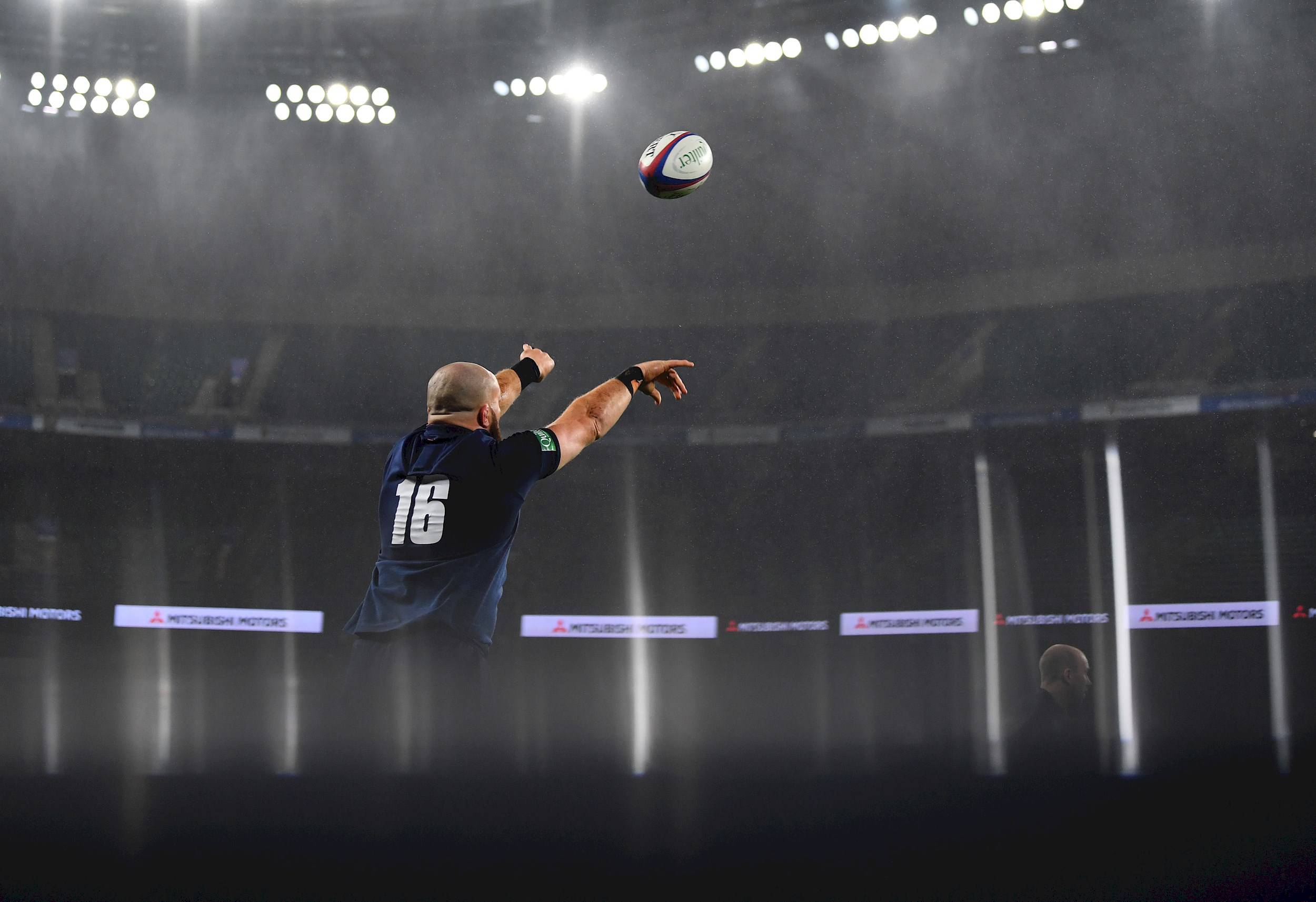 The emotions of that game at Twickenham in October have been well documented. An England Rugby video circulated showing the test debutant on the phone to his partner, Jen, and parents after the final whistle in front of an empty stadium. After being an unused replacement for the Calcutta Cup fixture, 'Dunnie' finally felt worthy of his England status.

“Having 80,000 people there would obviously have been fantastic but you’re not speaking to them directly. You don’t have to confront them and tell them you didn’t get on the pitch. I found that conversation tough with people. So when I got the cap, I wanted to tell my family immediately.

“My daughter was 10-months-old when I went away in 2017 for the first time with England, and Jen had just gone back to work. That was so hard for her; when I’m away, pre-season camps and there’s two of them and you leave them and your family behind. You’re basically making them a single parent. So what she gave, and my parents, was massive for me.

“The video was releasing all that emotion that’s been living within me for the past four years.”

Following Dunn’s first cap, he was named on the bench against Georgia in the Autumn Nations Cup, a game in which fellow hooker, Jamie George, scored a hat trick; the first England hooker to do so.

“When I’m watching, I’m thinking ‘I could do that, that could be me’ but then ultimately, from a selfish point of view, if we’re 40 points up at half-time, I’m getting more game time. The bigger the lead, the more opportunity I’d have to get some game time and to prove to Eddie that I can do it. So I was over the moon for him, the team and myself to have that opportunity."

Dunn secured his second cap that day and went on to pick up his third a week later against Ireland. Named in the ‘shadow squad’ ahead of the 2021 Guinness Six Nations, Dunn has impressed for the Blue, Black and White this season, picking up two tries in last weekend’s victory at Newcastle Falcons. The game displayed Bath’s strength upfront, with all six tries coming from the forward pack.

And if it wasn’t yet known, Dunn’s love of the up front battle was certainly clear to see during Bath’s win at Franklin’s Gardens in February. With five minutes remaining and a point the difference, Saints opted for the scrum - much to Dunn’s approval.

“I love scrummaging when it’s going well in a game. When you’re doing it in training, repeating a scrum 30 times against your mates and my ears are bleeding… well, that’s different. I’m not one to be ‘I love scrums, I love watching scrums!’ but I do love the energy it brings to the game. When you go well in the front row and then you get Anthony Watson or Tom de Glanville run 60 metres to slap you on the back and fire you up… that’s a massive energy giver. 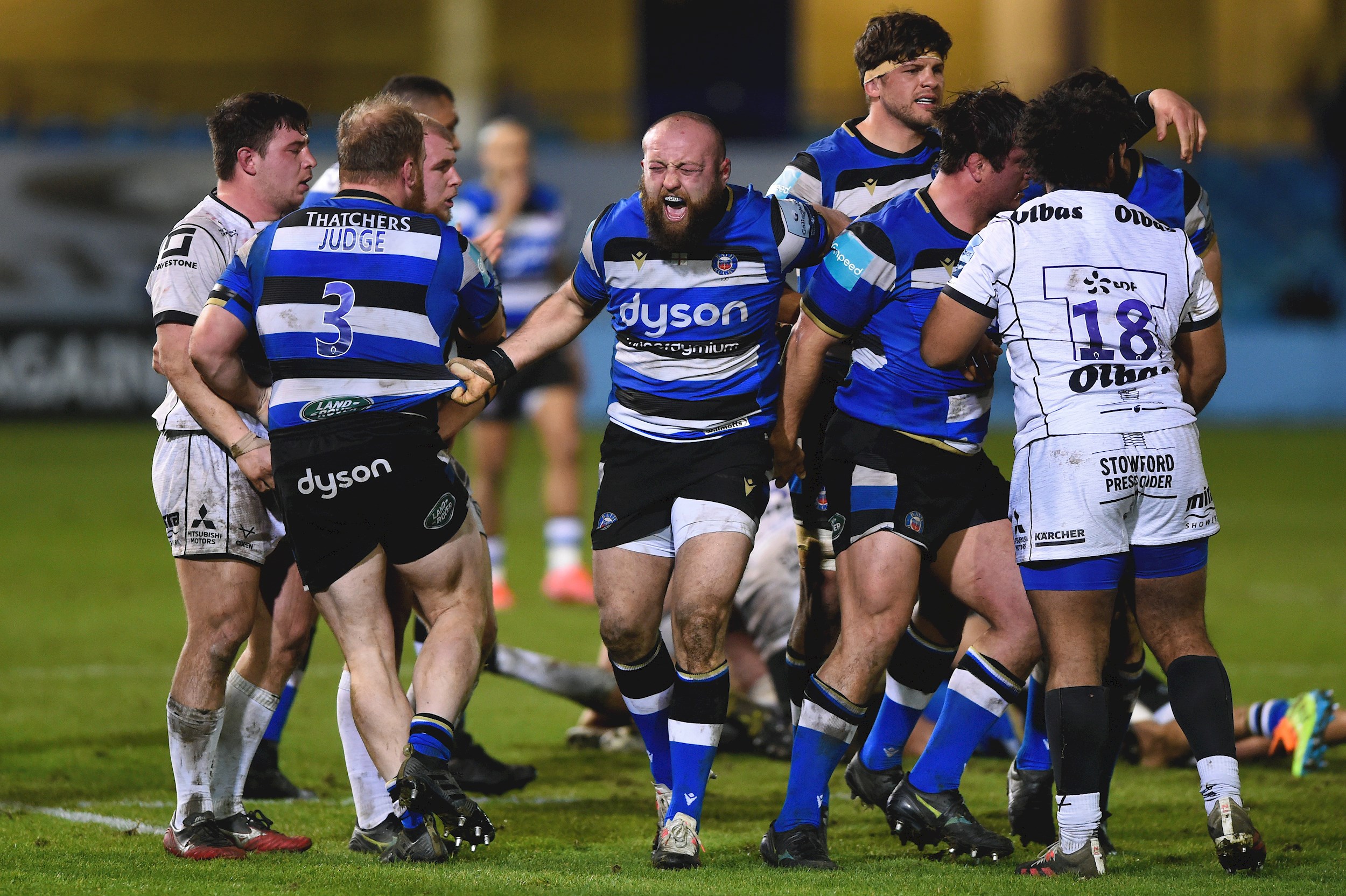 Dunn’s England test debut came exactly 231 days after the Six Nations fixture was originally due to take place, owing to the Coronavirus pandemic. Having run onto the hallowed turf for England, and with Bath going strong in the league, Dunn’s focus remained unshakable in lockdown - helped by his young family.

“I think there’s where the beauty of having a family came into it,” said the father of Sophie, 4, and Toby, 2.

“If you spoke to some boys during the first lockdown, they were a bit bored. They’d done their training, running, going to the gym on their own. Whereas I was so busy with the kids; I turned into the primary care parent overnight, which I wasn’t used to.

"My partner, Jen, was working ridiculous hours in ICU and up at Dorothy House Hospice in Winsley so I was with the kids all day. I was lucky to get the opportunity to train. I was getting up early with my boy and then I’d try and get a session done before Jen went to work. I was looking forward to training. Having kids is quality but when you’re in lockdown and you’ve done all the arts and crafts, all the baking, you’ve counted to 10 twenty-five-thousand times…

“So actually going to training, I was really excited. That moment you get to go and train and be your uncensored self… I was missing that massively. It kept me on track to play rugby and actually, parenting wise too."

Not one to shy away from a challenge, specifically being locked down during a global pandemic and without the usual training practises available, Dunn got inventive…

“I paid someone to put a throwing target on the outside of my house. So I’ve got a 2.8 metre high target with a net behind it for throwing into. I’m not sure whether my percentages have changed but I’ve been throwing pretty well for Bath, so it hasn't hindered me!”

While Dunn adjusted to lockdown well, for his partner Jen, it proved an altogether different challenge. 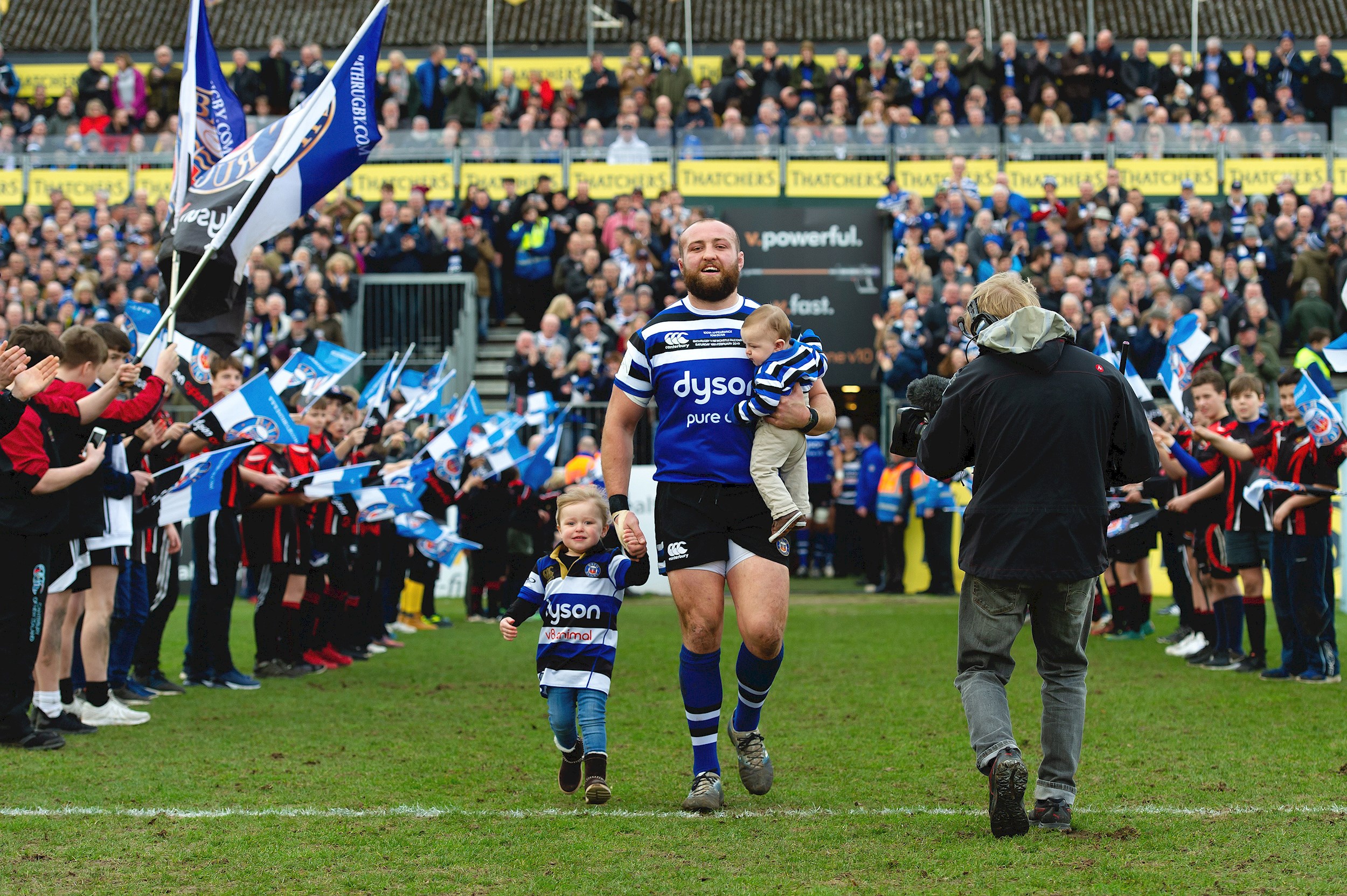 Speaking to Dunn it’s evident where his heart lies; firmly with his family. It’s what motivates him to succeed both on and off the pitch and has done from a young age.

“When I was younger, I was a state school kid and there was a lot of private school kids who got their opportunities before me. And I guess I begrudged that slightly. I was never the sharpest with my tongue; my strength was in my physicality. And in rugby, you get rewarded for that. If I physically beat that man, I’m going to come out on top.

“I was the first in my family to go to Uni, I was also the first to play rugby professionally and my family’s sacrifice allowed that. That motivates me every day.”

And the big dream still to come?

“Obviously when you have children, it changes again. You want them to watch you do good things, you want them to be proud of you. I did it, I got my cap, and they weren’t there. I’d love to do it with them watching in the stands.”

His family have been fortunate to watch Dunn in a Bath Rugby shirt on many occasions since his debut nine years ago, but unfortunate won’t be present this Sunday as he runs out for his 150th match for the club

It has been a long, hard road which has relied on a lot personal hard work, but it has been a continuous journey of doing what he loves for the Blue, Black and White.

“The majority of good things that have happened to me, the opportunities it has given me, have come through rugby and the Bath shirt. It’s a massively proud moment to be able to do it again.” 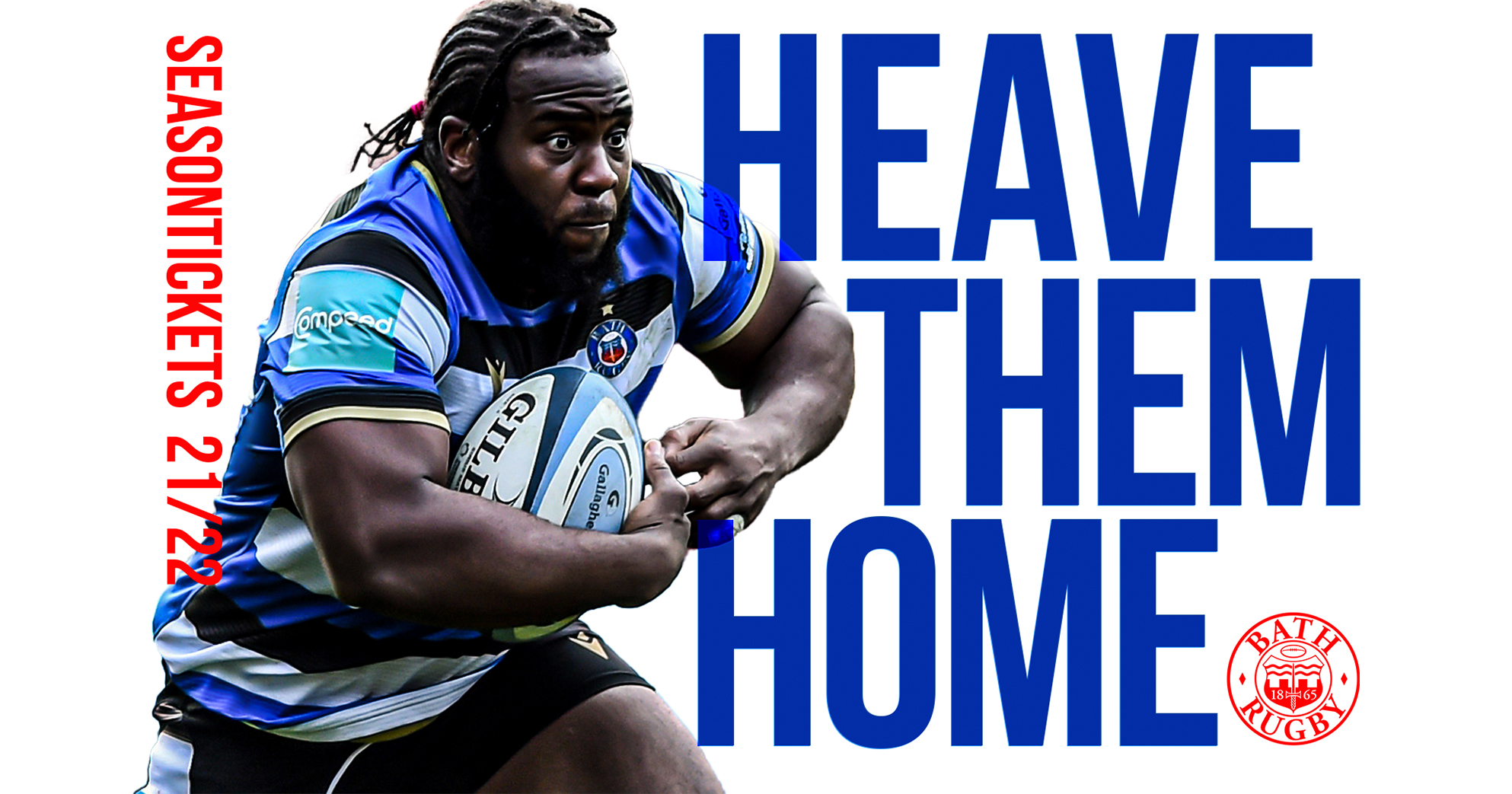