The Journey of Jeff Williams

The Red Bull Uni 7s comes to the Rec next Saturday as part of the Club’s Festival of Rugby, so who better to speak to than former England Sevens star - and Bath Rugby new boy - Jeff Williams?

The dynamic 27-year-old from South Africa scored 36 tries in 20 tournaments for England Sevens, but his route to stardom in the abbreviated form of the game was an unusual one, to say the least.

“It’s a very interesting story. My old man emailed the RFU after hearing that one of his mates’ sons was playing in Scotland,” says Williams. “His thinking was, ‘Well if he can do it, Jeff can do it’, so he sent off this email saying I was eligible to play for England.”

Williams Jr was somewhat taken aback upon learning of his father’s initiative. “When he told me, I said: ‘What are you doing? You can’t email an international rugby union and say ‘This is my son, these are his stats, I’m English and I want him to play for England'”.

To Williams’s astonishment, though, none other than England Sevens coach Ben Ryan replied. Ryan, now overseeing the Fiji Sevens team, offered to give Williams a trial if he stumped up the cash to make the trip over. But if you thought this was where the fairytale begins, you’d be wrong...

“I was terrible!” exclaims Williams, who at the time was playing for Chateaurenard in French rugby’s Fédérale 1. “I wasn’t quick enough, I wasn’t strong enough. But they saw something in me because nine weeks later they said they’d fly me over. So in training I worked extra hard because I knew the level I needed to get to.”

It was Williams Sr who ensured his son’s career was kept on track by "pestering" Ben Ryan for another trial, although it was Jeff himself who had to put in the extra work, now in the knowledge of the fitness levels he needed to achieve to make it.

“My French club didn’t know about it, but I was jumping between playing games on Sunday in France and doing trials in England . I kept it under wraps, but training camps would be from Monday to Wednesday and, since it was a semi-pro club in France, I’d have those days off and I’d be flying back and forth.”

As the London leg of the World Series approached, Williams was called into Ryan’s office. By now he’d been doing stealth missions between France and England for a month. As he recalls it: “Ben said, ‘Look, we’re going to offer you a contract and you’re playing in the tournament'. I got my first cap, scored with my first touch, and that was four seasons ago.”

Williams was present at the inaugural Red Bull Uni 7s in Richmond last year (fittingly won by the University of Bath). He and his England Sevens teammate Mat Turner, a fellow South African, handed out jerseys to teams at a restaurant in Kingston.

“It’s exciting, because Red Bull is a really huge brand and it fits with Bath, so there’s a good partnership there,” he believes. “We always used their products before matches and they always made sure we were stocked up.”

The Red Bull Uni 7s at the Rec will also bring back memories of his fledgling sevens career. “I started playing in this sort of competition. My first tournament was in Melrose, Scotland, where the game has its roots.”

Back home in South Africa, it was all rugby union for Williams. It is ironic, then, that it was through another household name in rugby sevens, the iconic Ben Gollings, that he had his first taste of the game.

“Ben Gollings was in charge of a good Samurai Sevens team at the time,” says Williams of the renowned invitational side. “We went out and played in Wales, and that was my first overseas rugby that I actually participated in. Now it’s come full circle back to rugby union.”

So what made him give up the jetset lifestyle that rugby sevens offers players on the World Series? “I told many people it was my dream to return to this form of rugby, and to do so at a club like Bath," he answers. "However, I owe a lot to sevens: it’s given me so much in terms of developing me as a player and my skill levels. I was half the player I am now when I started and sevens sharpened me up.” 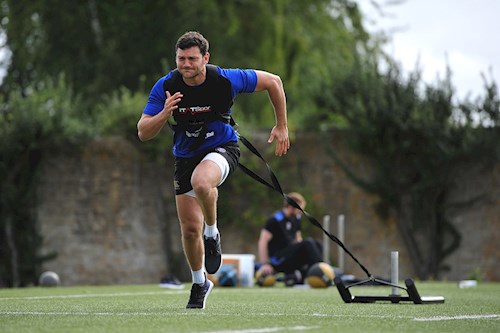 When we spoke recently to Bath Rugby’s Academy Performance Manager about the challenges of making the transition from sevens to union, it was with Williams in mind.

So how has he found the conversion process? “I’m working with world-class conditioners here at Bath. They treat me like a car engine, fine-tuning me. The weights have been really tough, so adding that to the running has not been not easy. It’s not like we don’t run in rugby union, especially in pre-season!”

He swears that Bath’s recent pre-season training camp in Portugal was one of the toughest things he’s ever done. That training block was incorporated into eight weeks of gut-busting work, including two-a-day gym sessions.

“To get through Portugal having managed to do every on-field session, I was really proud of that,” says Williams. “We celebrated after with an ice cream and a dip in the pool, which was amazing. You looked at what the forwards had been through in that camp, because they sometimes had double what the backs were doing, and it was unbelievable. It looked gruelling.”

Of course, he's used to pushing through the pain barrier, describing the training load in his previous career as “essentially doing seven pre-seasons in one, whereas in rugby union, especially this year, it’s one super-long pre-season.”

Williams continues: “When it’s tournament time in sevens and you’ve got six games on a weekend, it’s learning how to manage yourself mentally: balancing your energies and finding what works for you. That includes rest, supplements, recovery etc.”

It’s not just the work in the gym and on the training pitch that has changed for Williams: it’s the whole lifestyle. “I’ve been used to travelling the world as part of a team where there’s often more management than there are players,” he says. “The great thing about a rugby union team is that it’s such a big community and there are so many different characters from one side of the room to the other at Farleigh.”

“Guys are coming through at 18 and there are guys in their 30s, so you can pick up so many interests from this wide range of demographics. That said, in my four years with the boys at sevens you become a family, living in each other’s pockets.”

Now settled right in the centre of Bath, where he says “you can really feel the energy of the city”, Williams enjoys nothing more than going out for a good coffee with his new teammates

“When I’m walking around with Matt Banahan, you can’t go three metres without someone stopping him,” he laughs. “He knows everyone, and that’s testament to a great Club man, because he’s been there and done it so many times. The people love him.”

Williams says he experiences the same thing when he goes out with Ross Batty and Leroy Houston. “Those guys have earned that respect throughout the streets of Bath and I can’t wait for a chance to do that. Our first home game of the season will be special," he says, admitting that he got goosebumps the first time he attended a match at the Rec.

“It’s a big year for us. To be part of the Club’s 150th year is something special. We’ve got a good couple of challenges on the way with the West Country Challenge Cup, and the Festival of Rugby is something I can’t wait to experience.”