Two summer signings will make their Bath Rugby debuts when Stuart Hooper’s men travel to Sale Sharks on the opening day of the Gallagher Premiership season.

Danny Cipriani earns his first start in Blue, Black and White against his former club linking up with Ben Spencer in the half-back positions.

With a solid ability to anchor the scrum, South African Johannes Jonker is named at tighthead prop in a front row containing the familiar faces of Beno Obano and Tom Dunn.

The latter was on the scoresheet on Bath’s last trip to the AJ Bell Stadium as was Josh Bayliss who lines up at Number 8 alongside flankers Miles Reid and Sam Underhill. Captain Charlie Ewels and Mike Williams complete the pack, pairing up in the second row.

Another try scorer in the cold February win over Sale was full-back Tom de Glanville who features in the back three with full debutant that day Will Muir and long-serving wing Semesa Rokoduguni.

Academy centre Max Ojomoh is set for his third league outing in the 12 shirt and partners Jonathan Joseph in the midfield.

Among the replacements, D’Arcy Rae and Jaco Coetzee could debut for the club and in the Premiership. 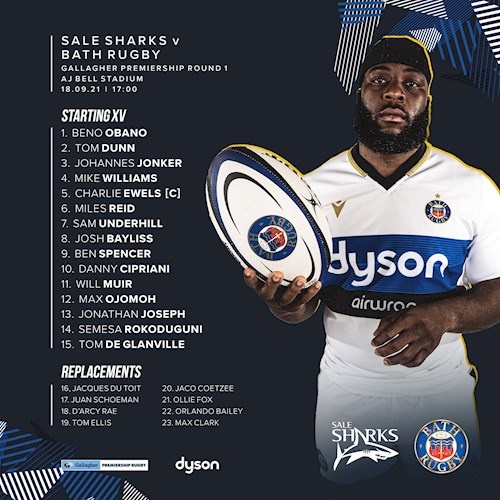