The England Under-20 hooker, who has risen through the Blue, Black and White pathway, debuted in the tournament back in November and earns his second Bath cap. Will Vaughan and Ma’afu Fia complete the front row.

Fellow Senior Academy forward Ethan Staddon features after a long road to recovery. The 19-year-old was the youngest ever player to feature for the club in the Premiership when he debuted in December 2020 and returns following a year out with an ACL injury.

He is named at blindside flanker alongside Wales Under-20s’ Thompson Cowan and first-time captain Richard de Carpentier who adds important experience to the pack. Harry Casson is set for his full Bath debut in the second row, partnering Academy lock Josh Dingley.

The backline sees two changes from the last Premiership Rugby Cup outing against Bristol Bears and they both come at half-back.

Ollie Fox takes the scrum-half slot with George Worboys, who recently extended his stay at the Rec and has 10 points in the Cup, starts at fly-half.

Academy duo Jasper Spandler and Archie Stanley could make their senior debuts for Bath as replacements with their University of Bath teammates Elis Horgan and Alex Clayton also included on the bench. The Blue, Black and White’s third guest replacement is Dale Lemon from Hartpury University RFC. 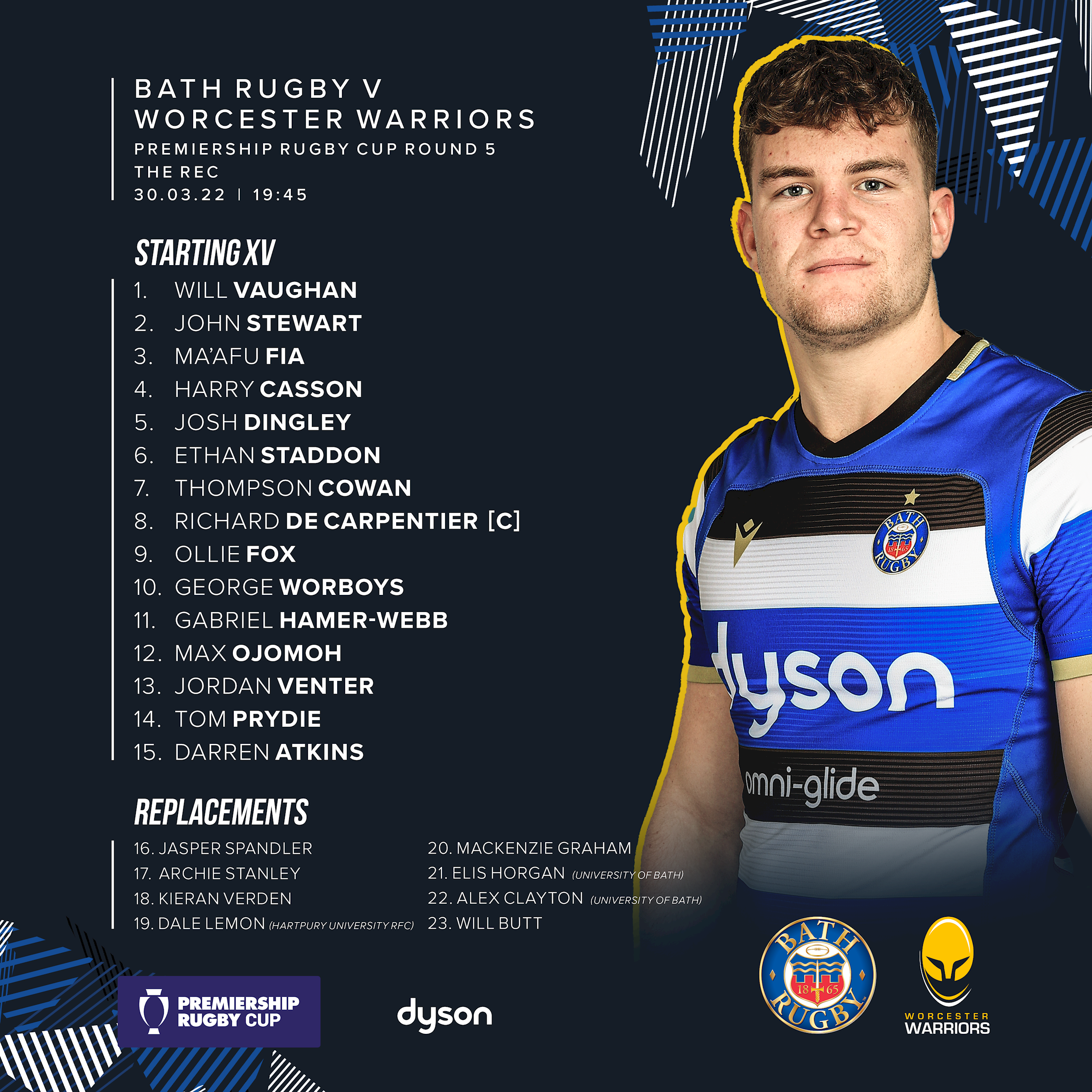 UKRAINE DONATION COLLECTION AT THE REC

Bath Rugby is asking for donations to be delivered to those affected by the war in Ukraine.

From midday until 16:45 on Wednesday 30 March at the Rec, three vans will be positioned by the William Street Gate entrance car park with the club encouraging donations of (van 1) sleeping bags and blankets, (van 2) adult clothing, (van 3) children’s clothing and toys.

After 16:45, only supporters with tickets to our match with Worcester Warriors in the Premiership Rugby Cup will be able to donate.

Following the collection, a group of Bath Rugby players will drive the vans to a Red Cross Centre in Poland to distribute the goods to Ukrainian refugees in need.

People are encouraged to bag their donations separately so they can be distributed into the correct van.

Thank you in advance for your support and donations.