It is often said to perfect a skill, one needs to consistently educate oneself in order to acquire the relevant knowledge to perform it successfully.

'If at first you don't succeed, try and try again' – as has been the common phrase for over 180 years.

But what if for some people it didn’t? What if it was more beneficial for a person to remove themselves from their practice to aid their performance?

“When I was younger, I probably kicked too much,” Bath Rugby fly-half Rhys Priestland said of his goal-kicking. “I always had the mindset you had to practise to get good. I’d keep kicking and kicking, my knee would be sore and it was quite hard work.”

By his own admission, Priestland used to be ‘quite stressed’ when it came to kicking. Nowadays, he is one of the most precise, relaxed and accurate operators in his field. So much so, the 34-year-old broke a 16-year Gallagher Premiership record for most consecutive successful kicks (29) last Sunday at Franklin’s Gardens.

Previously jointly held by Jonny Wilkinson and Mark van Gisbergen, Priestland slotted five times from the tee to earn the accolade and help Bath to a fantastic comeback victory over Northampton Saints. It is now four months since the Welshman last missed a shot at goal for the Blue, Black and White. 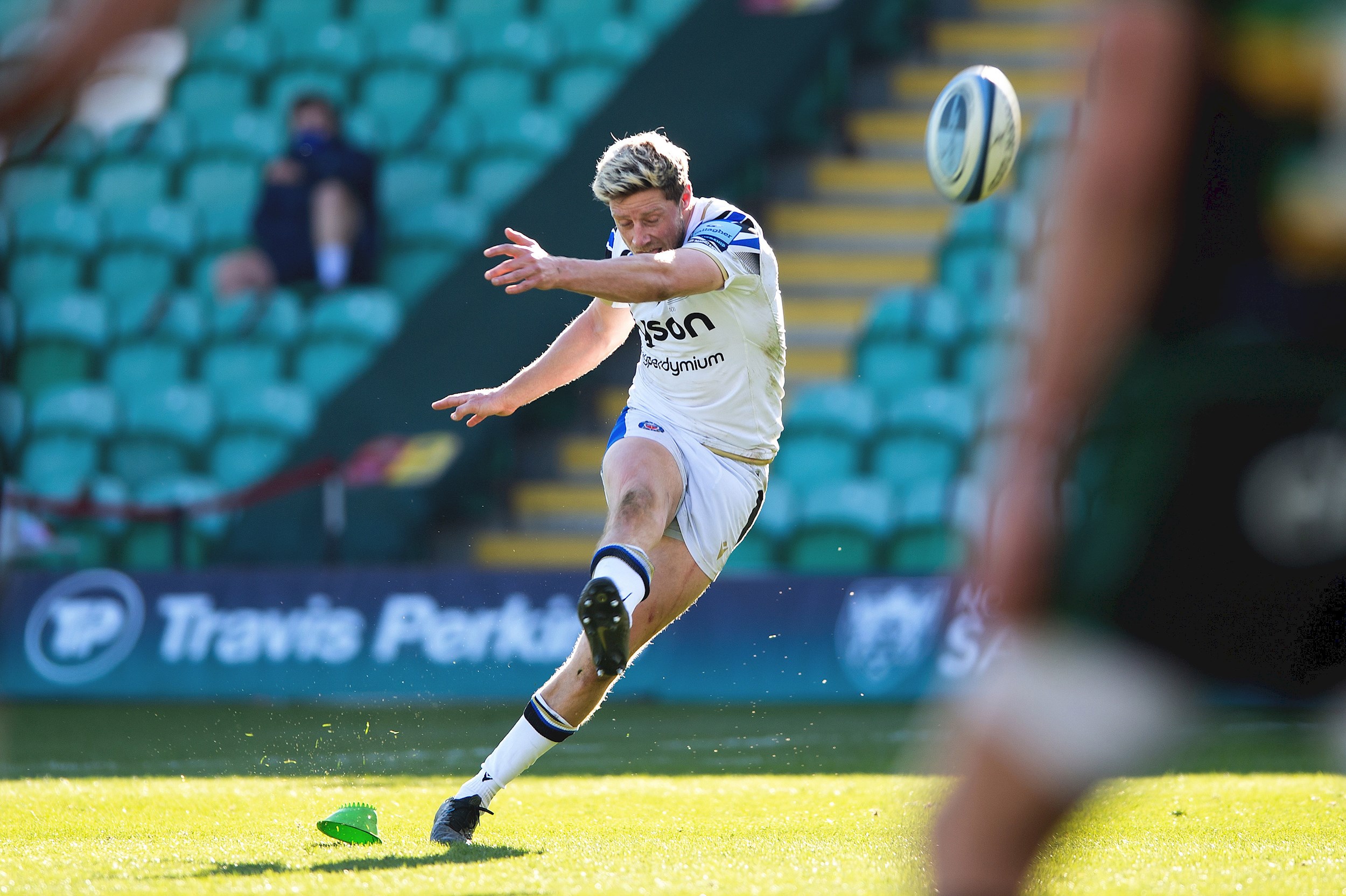 A shift in mindset has helped him develop into one of the most reliable goal kickers in the league, something encouraged by ex-Bath man Olly Barkley.

“I do a lot less kicking nowadays and limit the amount I do in training,” he continued. “Whereas before I’d maybe kick 15 kicks after training and if I didn’t do well, I’d end up doing more and made sure I finished with three on the bounce.

“I learned quite a bit off Olly Barkley when he came down to play for the Scarlets. He watched me kick after training one time; I finished on the left touchline and I had missed three or four on the bounce and he could see me getting worked up. I just kept kicking and kicking, getting worse. He came up to me and said I had to relax a little and said it was ok to finish on a miss or finish in front of the posts if I felt I really needed to finish on a successful kick.

“That’s something I’ve taken on board as sometimes you won’t kick well and it’s about being able to park it and come back the next day, focus on your process and more often than not if you do that the outcome will look after itself.”

As well as having a clearer approach, Priestland owes a fair amount to his forgotten former tee, left in camp with Wales on a fallow week and never to be used again.

“I used to kick off a low tee. I went back to the Scarlets and I’d forgotten my tee!

“We had a player at Scarlets called Frazier Climo and he kicked off the tee I use now. He said I could borrow his, I kicked and I instantly felt a lot more comfortable. I went back to the Welsh squad and told Neil Jenkins I was thinking of changing my tee and he wasn’t too happy as it was right in the middle of the season!

“I’ve felt loads more comfortable kicking off a higher tee. That’s one thing I’d tell youngsters – you’ve got to experiment and find out what’s good for you. Just because you’ve got one tee it doesn’t mean you have to stick to that.

“Kicking can be quite an individual thing. Thankfully I’ve found something that seems to work for me now which is good. I wish I’d changed a lot earlier on in my career.” 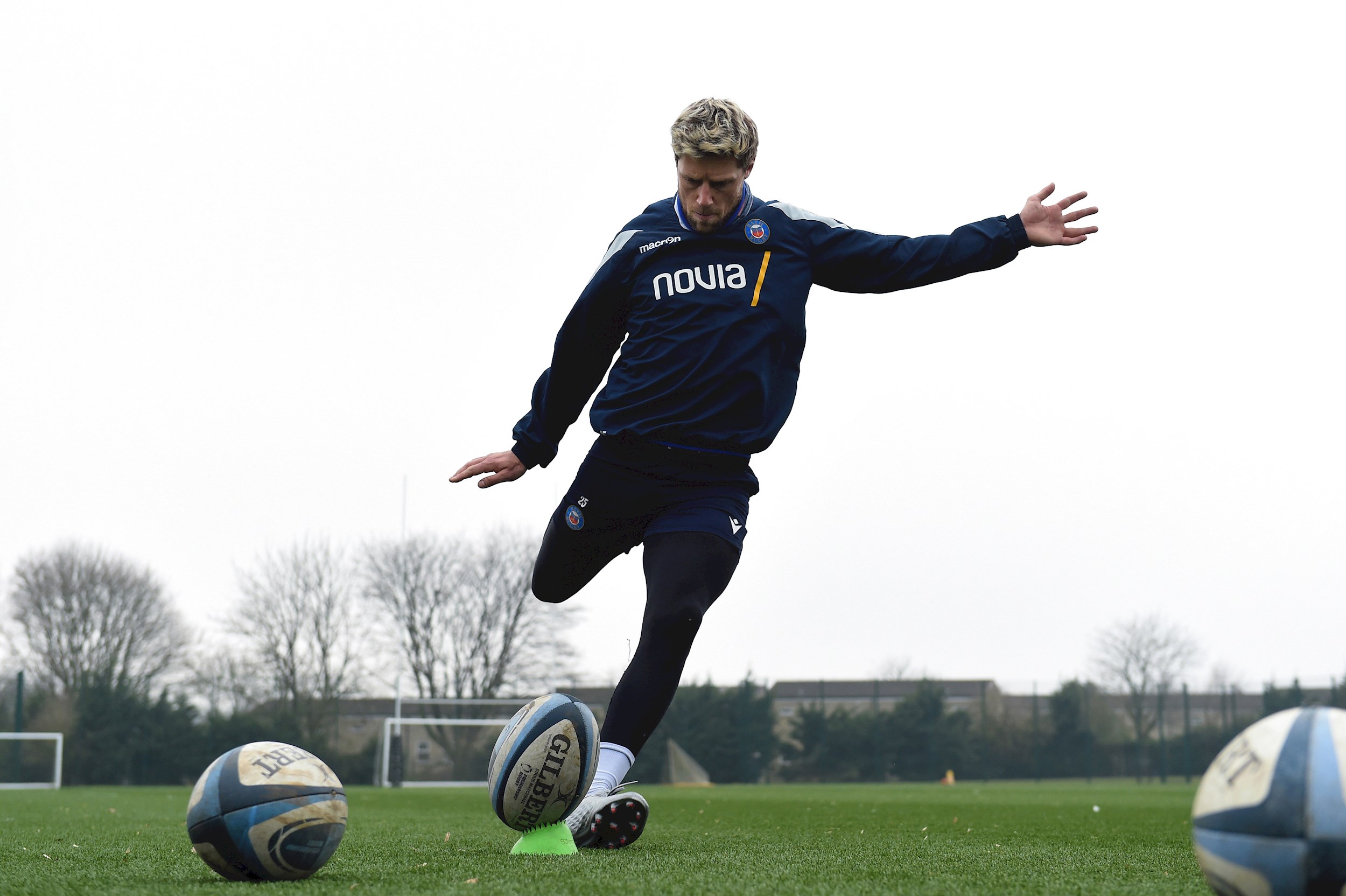 Priestland, whose currently tally sits at 32 in a row, has come close to breaking the record once before, hitting the mid-20 mark, but was unaware of the target he has now exceeded.

He jokingly places blame on Aled Brew for not reaching it sooner, however this time around he modestly says he would have given it up for a Bath win.

“The highest I had before was probably mid-20s,” he recalled.

“Brewy ended up scoring a try but didn’t put the ball down near the posts. I remember losing my rag with him on the field! He put the ball down just as soon as he got over the line and I found out later he’d broken his arm so I felt a little bit bad for shouting at him but I ended up missing that kick. All I could think about was how selfish Brewy was!”

Priestland concluded: “Looking back from where I’ve come from at the start of my career, a lot of games I was involved in came down to me missing kicks and that was quite tough to take.

“It’s quite pleasing now that more often than not that when I am involved in games, if my kicking does have an influence on the result it usually has positive effect.

“I’d have given it up for the win and I genuinely mean that. I’m just glad to have helped the team out over the past few weeks.”