An outstanding first-half performance led to Bath Rugby earning a bonus-point victory over Worcester Warriors in Round 14 of the Gallagher Premiership.

Brutality up front allowed for expansive rugby which saw Will Muir scoot in for his first try in Blue, Black and White.

A duo not so unfamiliar with scoring for Bath, Tom Dunn and Zach Mercer muscled their way over before Muir galloped home for a spectacular second.

Scrum-half Ben Spencer dotted down the fifth on 27 minutes and the relentless nature of Bath’s attack continued with Max Clark finishing on the stroke of half-time.

Worcester grabbed a quickfire double early in the second period ahead of Dunn adding another to his tally and the Warriors rallied to secure a late bonus with two further tries.

All six tries in the North East were scored by the pack, but it was wing Muir who opened for the hosts this time around, collecting Rhys Priestland’s gracefully looped pass to power into the corner.

Bath made it two shortly after. Several pick and goes hammered the Worcester line before their gnarly forwards wilted and Dunn brushed the whitewash.

Tom de Glanville threatened on the outside following a sequence that included a 30-yard pearler of a pass from Elliott Stooke as the home side continued to put their pedal to the floor. Their ruthless approach was rewarded when Number 8 Mercer barged his way to the line for his fifth Premiership try of the campaign.

Warriors ventured forward for the first time after retrieving from the kick-off but found no way through captain Josh McNally who smashed loosehead Marc Thomas back a couple of yards to win a turnover.

From there, the best finish of the game came. Priestland sent de Glanville on a trot and he found Muir on the left. With a lot to do, the former England Sevens man pinned back his ears, backed his speed and stepped wonderfully by the covering Warriors defence for his brace.

On the other side of the field, Muir’s ex-sevens international teammate Ruaridh McConnochie showcased his sprint ability. Gathering a flat Jonathan Joseph ball, the 29-year-old worked his way past a number of defenders and rewarded Spencer’s superb support play with the nine running in off his shoulder.

Academy back Orlando Bailey came on for his second Premiership outing on the half-hour mark and a fellow homegrown player in Miles Reid proved a nuisance at the breakdown whenever Worcester did have possession.

Long-serving centre Joseph delivered a moment of class with the clock in the red to end a sensational first 40. Caught flat due to Warriors’ line speed, the England midfielder executed a cute grubber with the outside of his boot and the bounce fell kindly for Clark to make it six first-half Bath tries in the Premiership for just the third time in club’s history.

Adventurous, skilful and physical. Worcester couldn’t cope with Bath, but the half-time break helped the visitors regroup and they touched down twice in quick succession in the second half.

Joe Batley charged down Priestland for five points and Perry Humphreys found space in the wide channel for a second.

Any hopes of a comeback were short-lived as Bath got themselves back on the front foot and Dunn was walked to a score by his friends. Bailey converted from near the touchline for his first Premiership points.

Worcester had more of the ball thereafter, however found a home outfit who hounded them out at every opportunity.

They did eventually breach the Bath defensive set. Humphreys and Ethan Waller crossed for consolations, but Bath’s efforts earlier in the match meant a comfortable scoreline on an afternoon which saw 10 Academy products grace the field. 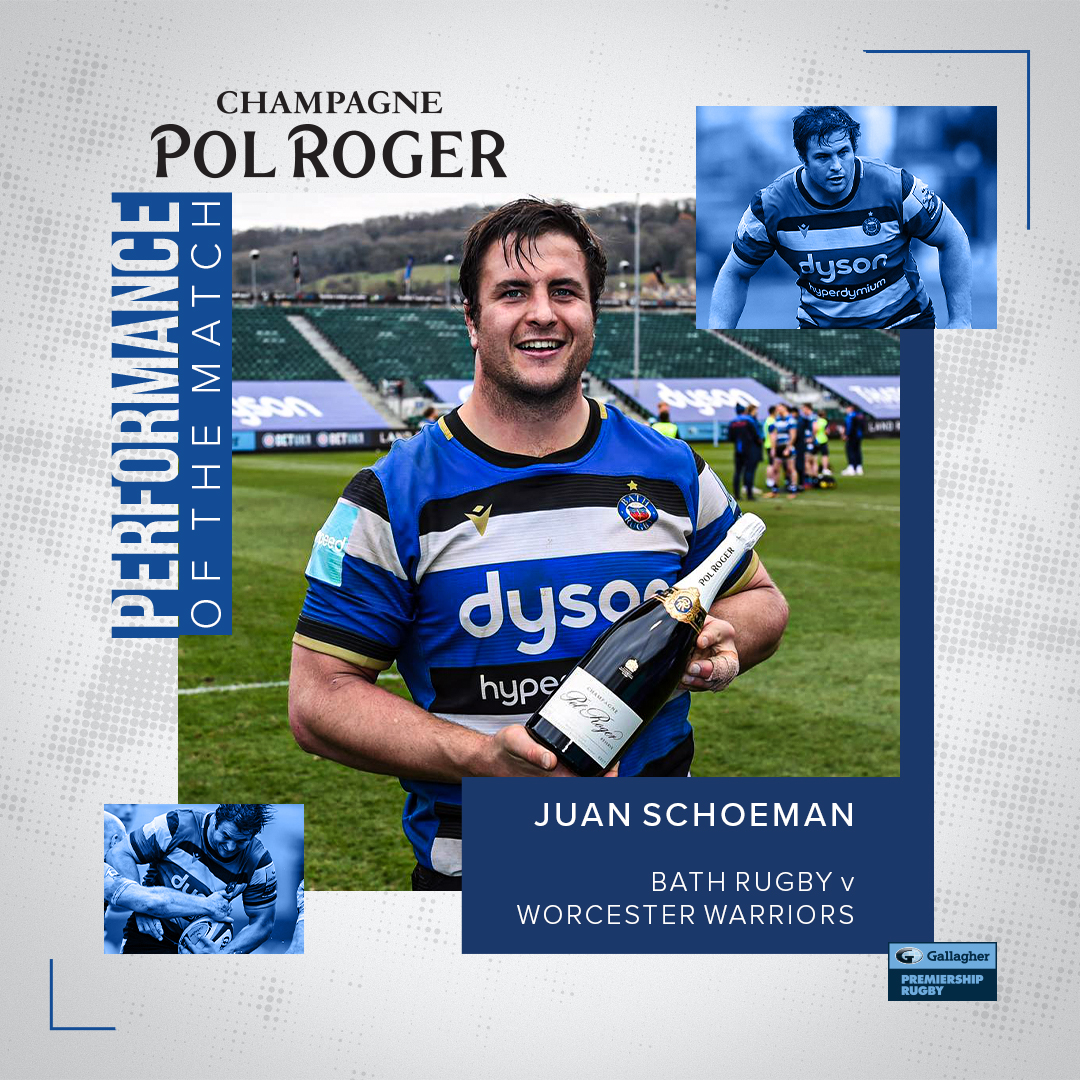 Finlay Smith with a conversion for Worcester.