Orlando Bailey slotted a late penalty to earn Bath Rugby their first victory of the season against Worcester Warriors.

It wasn’t the prettiest of contests by any stretch but tries from Semesa Rokoduguni and Max Ojomoh aided the Blue, Black and White’s cause with Bailey converting both.

Despite an early Rory Sutherland red card, 19 first-half points courtesy of Jamie Shillcock, Joe Batley, Gareth Simpson and Fin Smith saw Warriors lead at half-time, but it was the resilience of the home side, roared on by the Rec crowd, which saw the result turn on its head with Tom de Glanville scoring the crucial try ahead of Bailey’s strike.

Tom Doughty made his maiden Premiership start for Bath Rugby while Josh Bayliss and Ewan Richards lined up in the back row.

Worcester named three former Bath players in their 23 – Christian Judge earned a start while Matt Garvey and Will Chudley were on the bench.

Will Muir was replaced by Tom Prydie just minutes before kick-off and disruption continued for Bath as Will Stuart was forced off with a head injury inside a minute.

Scotland prop Sutherland was red carded for the incident with his English counterpart and the hosts made kind of their man advantage with third-minute score.

On his first Premiership start, Doughty rumbled on from the back of a maul and his soft hands released Ollie Fox who in turn sent Jonathan Joseph on his way. The ball was quickly recycled to the right and stepping in from his wing, Rokoduguni finished smartly with Bailey converting with aplomb.

Worcester were quick to respond as they sucked the Bath defence in to allow Shillcock a diagonal sprint to the corner.

The score didn’t affect Bath’s intent as de Glanville and Prydie went on several bursts forward while Josh McNally and Lewis Boyce tested the Warriors’ reserve with bulldozing carries close to the line.

The pressure soon resulted in a second try for Stuart Hooper’s side. Joseph’s fantastic dink in behind was superbly gathered by centre partner Ojomoh on the stretch and after the TMO’s input, which built the anticipation amongst the crowd, referee Craig Maxwell-Keys changed his on-field decision to award the touchdown.

Bath’s forwards were causing a lot of issues in the maul allowing the backs time and space to move with grace, but it was Warriors with the next points as a looping Simpson pass sent Batley in.

Discipline thereafter was an evident concern as a succession of penalties allowed Worcester in again before half-time. Scrum-half Simpson crossing after strong work from Francois Venter.

Bayliss was sent to the sin bin early in the second period as Bath illegally held out Worcester’s maul close their line, however they worked relentlessly to thwart their opposite pack in the next phase.

It was a tug of war without any score as both teams attempted grasp full control and it was Bath who struck next.

Starting the move, de Glanville combined with Rokoduguni as the Blue, Black and Whites gained 40 metres. Patience was key for the next opportunity and the latter’s deft offload allowed the former to level the scoreboard with just over 20 minutes to go.

Rokoduguni’s fine performance saw him make in-roads once more, joined by Academy forward Richards who was impressing from the flank.

Whilst the young guns in Fox, Ojomoh, Richards, Bailey et al. all delivered displays to be proud of, it was the blend with the experienced players which presented the opportunity to clinch the result. Ruaridh McConnochie darted onwards from full-back, earning a penalty attempt from distance and Bailey kept his cool to edge Bath ahead.

With the game ticking towards its close, there were several defensive efforts that meant the four points were secured. McConnochie stopped a Worcester penalty going out on the five; Max Clark produced an incredible tap tackle and Joseph hammered Smith in the midfield to push the Warriors back.

The final play saw a huge effort from the pack to win a penalty. It was far from the complete performance but it was a united front – players, staff and supporters.

Pol Roger performance of the match 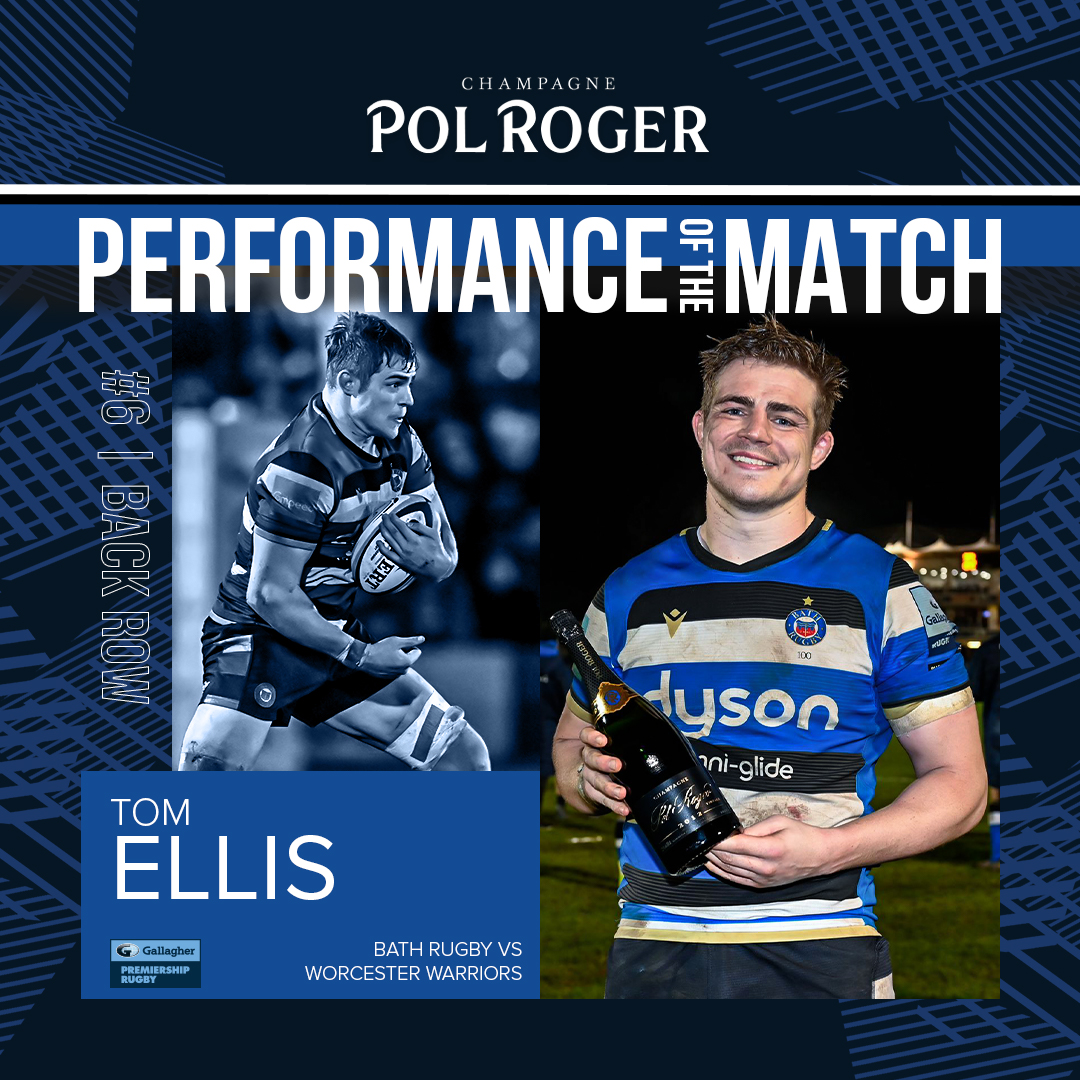 Rory Sutherland sent off for Worcester.

Fin Smith with a conversion for Worcester.

Fin Smith with a conversion for Worcester.