The Round of 16 meeting between Zebre and Bath Rugby at Stadio Sergio Lanfranchi will be the first between the clubs in European competition.

Previously, Bath have faced Italian sides in Europe on 10 occasions, winning all of them by an average margin of 44 points, but face a side in good form in the Challenge Cup.

Zebre are unbeaten in their last four games (W2, D2) which is their best ever run in the tournament. Their last two home Challenge Cup outings have ended in draws (7-7 v Bristol Bears, 25-25 v Bayonne) – a rarity in the modern game!

They are not a side that likes to have possession based on this season’s statistics. The Pro14 side have averaged just 11 minutes and 43 seconds with the ball in Europe this term and have also averaged the fewest amount of carries (68 per game).

Bath’s last involvement in the Challenge Cup was in 2017 where they reached the semi-final, narrowly losing to Stade Francais who went on to lift the trophy.

The Blue, Black and White will be fielding five Academy products from the start in Italy, two of which are Senior Academy backs Orlando Bailey and Max Ojomoh.

Of the young players coming through and earning their opportunity, Director of Rugby Stuart Hooper said: “The guys who have played have all earned their opportunity and I think they have done through what they do every day in training.

“Then when game time comes they show they can not only exist at that level but be real influence at that level. We’ve seen it before – Miles Reid and Josh Bayliss are two great examples of that; 18 months ago we would have talked about them in the same breath, but now we talk about them as regular starters and challenging internationals and British & Irish Lions for starting places.

“It’s about their ability to compete day in, day out and then when their shot comes they take it. All the young players are a pleasure to work with and they are enjoying their time at the moment.” 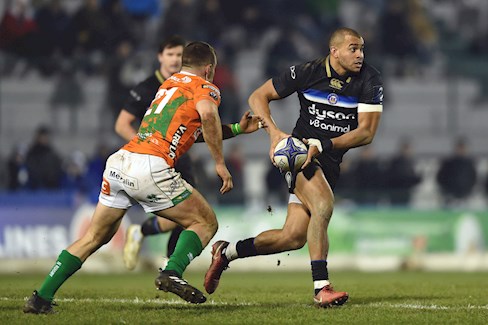 Bath made a winning start to their 2017/18 Champions Cup campaign, defeating a stubborn Benetton Treviso 23-0.

Back rower Zach Mercer and Welsh wing Aled Brew crossed in either half, but the hosts were hampered by yellow cards for prop Nick Auterac and hooker Tom Dunn.

the hosts found themselves forced back for long periods in the first half with Treviso turning the screw in the scrum.

Auterac's attempts to regain the upper hand at the set piece saw him sin-binned and Semesa Rokoduguni made a superb last-ditch tackle to deny Tommaso Benvenuti with his team down to 14.

Bath's backline suddenly sparked into life with Jonathan Joseph freed Rokoduguni before Chris Cook flicked a pass inside for Mercer to canter in just before the break.

Josh Lewis had a drop-goal attempt charged down as a fitful second half remained scoreless until the 70th minute.

But Bath finally added some gloss to the scoreline with a slick line-out move culminating with Francois Louw putting in Brew for the try.