The England football team have captured the hearts of the nation and have got everyone dreaming of European success. Is it coming home?

“I think so; I hope so!” Tom Carr-Smith said with a nervous laugh.

Carr-Smith has been named as a replacement as he and three other club teammates in Orlando Bailey, Ewan Richards and Nahum Merigan prepare to take on Wales.

With three bonus-point wins under their belt from as many games so far, Alan Dickens’ side could secure their own title with another should Ireland not secure their own five-point result against Italy.

England’s form has been testament to the culture instilled at the beginning of the tournament and the environment is one Carr-Smith has thrived in. He has continued to sponge as much information as possible to develop himself to best he can be. 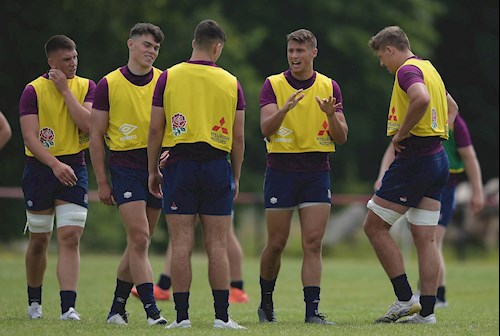 “We had a chat at the very start of the tournament about what we want to get from each other,” he said.

“The trend seemed to be we want to enjoy each other’s company but at the end of the day and put a marker down on the rest of the countries.

“I think the culture has been great. It’s a tight squad and it’s been class to get to know the lads off the pitch as well.”

The young nine continued: “Getting little tips of how players train at other clubs, how they prepare for games and taking that into my game has been invaluable.

“Luckily there are some good other nines here who I’ve taken a lot from into my game and hopefully I can do the same for them. It’s helped me have a different perspective of how to prepare for matches; somethings will work for me, somethings might not but it’s trial and error at the minute and it’s been a very valuable experience so far.”

Carr-Smith’s experiences in his first year as a Senior Academy member have also aided his development with the 19-year-old enjoying the journey alongside three players who he has spent a lot of time with over the past five or six years.

“Training with the seniors at Bath has stood me in good stead; training with world class players who are playing for the England senior team has definitely helped raise my standards every day.

“It’s been different training but training at Bath has definitely helped me and allowed me to express myself in the best way I can coming into this tournament.

“Then coming into an environment like this you can’t let your standards drop and you can try and test yourself against similar players to you and hopefully that can help put you in a good position.

Carr-Smith added: “It’s been unbelievable. I’ve played with Landi, John (Stewart) and Ewan since I was 13 or 14-years-old and now taking the stage with them and for me to make my debut at the same time as Landi and Ewan was amazing.

“We’ve all been on this rugby journey together and you kind of have to pinch yourself when you think about where we started and where we are now. It’s been great and I’m very happy for all of them.

“We all push each other; we know what gets each other going and pushes our buttons.

“Playing for England been amazing, I’ve loved it. It’s a huge honour and it’s something I’ve wanted to do forever, really. It’s been class to mix with the best players in the country at my age and I feel massively honoured to be involved.”