Having played internationally at Under-18 level, Orlando Bailey made his England Under-20s debut in the opening round of the 2021 U20 Six Nations last weekend.

The milestone continues a fantastic season for the 19-year-old who made his first Gallagher Premiership start for Bath Rugby in April as well as earning his European stripes.

England found themselves 19-3 down at half-time against France at Cardiff Arms Park, but produced a fantastic second-half display to record 38-22 victory.

“It was awesome to sing the anthem again alongside friends who I played with a year-and-a-half ago at Under-18s,” Bailey said.

“It was cool to make my debut at a major tournament. To kick-off against France was special and to get a comeback win felt really good.

“We didn’t start brilliantly, and we knew hadn’t fired any shots by half-time. We knew if we could keep the ball and attack them then we’d get some rewards. The momentum then shifted in the second half and we found a pressure point and didn’t come off it so they couldn’t get back into the game which was really pleasing.

“We tactically adapted well and stayed very focused in the second half; we knew if we gave them another sniff, they’d come back again so that was a really good shift in mindset and shift in how we were playing the game.” 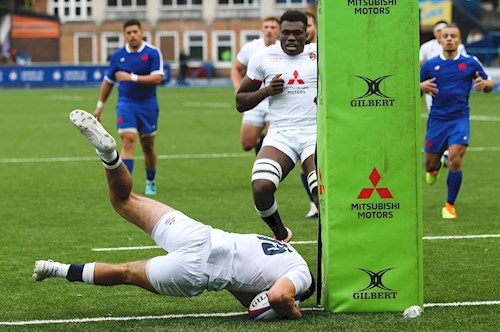 Usually found at fly-half, Bailey lined up for England at full-back in the opener and will do so again when they take on Scotland in Round 2 on Friday night.

He moved into first receiver on occasions throughout the match and it paid off in the 55th minute as he broke through to score the crucial game-changing try.

From the 15 position, Bailey enjoyed providing a different perspective from the backfield, offering advice for the decision makers in front of him.

“I was in at first receiver where I’ve played most my rugby,” he said of his try.

“I saw a prop in front of me and thought I’d have a go! When I went through, I got a little tap tackle and thought ‘oh no!’, then I just had to hold on to the ball and hope my momentum would take me over. I was pretty happy with that, it’s always nice to score, especially in a game like that.”

On playing full-back, the Senior Academy 10 added: “You’re second or third receiver but in some ways that can give you more space to see the game and talk about what’s happening in the game to the first receivers.

“For them it’s quite useful to have someone who understands the information you need at first receiver coming from a wider position. On the other side of it, you have a bit more space to run the ball at 15 on the kick returns and a bit more space in the wider channels.

"It’s a different challenge but it’s a good way to develop different skills.”

Bailey will be joined by two other Bath Rugby Academy players in the England 26-strong squad to face Scotland.

Lock Ewan Richards continues in four shirt while back rower Nahum Merigan continues as a replacement. Both made their Under-20s and Six Nations debuts in the win over France. Hooker John Stewart is a new addition to the 26 and is set for his maiden appearance.

Scotland suffered a 38-7 defeat to Ireland last time out and despite being wary of the threats they possess, Bailey insists England’s focus has been on themselves heading into the match.

“We’ve focused on ourselves quite a lot because it’s such a short turnaround.

“It’s about trying to build on where we left off in the last game, keeping control but also playing to space and expressing ourselves.”

England U20 side to face Scotland U20