Ewan Richards has taken life in the England Under-20s squad in his stride and is set for a third start in a row when Alan Dickens’ side face Ireland Under-20s on Thursday.

The Bath Rugby Senior Academy lock has featured in the number four in Rounds 1 and 2 of the 2021 U20 Six Nations and will this week line-up at blindside flanker.

“It’s been a tough couple of weeks in terms of turnarounds, but I’ve loved it,” Richards said.

“My first cap was against France; it was quite surreal and an honour.

"We were in the thick of it at half-time so to come back from that was amazing and then we got another win last week which was tough with the six-day turnaround; you feel it a little bit in the legs.

“It’s been great to get two wins and hopefully there will be another win on Thursday.”

It would be the second English win of the week if Richards and co were to overcome Ireland after the senior men’s football team progressed in Euro 2020.

The Euros, alongside the latest series of Love Island, have been featured heavily on the screens in camp as the RFU staff continue to provide an enjoyable environment for the players to thrive in.

“We’ve had little games nights in the hotel; they’ve tried to keep it fun and enjoyable,” Richards said.

“It has been tough being stuck in an environment and the staff have done their absolute best to keep it enjoyable and everyone is enjoying themselves.

“There was a little poker night the other night and there was a table football tournament going on, a little bit like the Euros. I can’t say I’m great and I’m Scotland!” 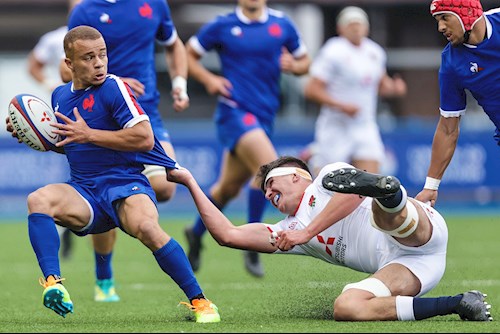 While he couldn’t perform as Scotland, Richards did excel against them last time out, helping England to a 31-12 victory.

His performances thus far have earned him another start, this time it comes in the back row alongside Number 8 Nahum Merigan with half-back duo Tom Carr-Smith and Orlando Bailey named as replacements.

Playing blindside flanker isn’t unfamiliar for Richards whose maiden Gallagher Premiership outing came in the position and the 19-year-old is thriving on the new experiences and fresh responsibilities that continue to come his way.

“I played back row a couple of times at school and I also made my Prem debut at six,” he recalled.

“I’m quite excited and looking forward to it. I’ll have to do a lot more running! But it’s a bit more expansive and I’ll be able to get around the park a bit quicker. Hopefully I’ll get my hands on the ball a bit more.

“We have been put into roles at Bath and I’ve been leading calling (at the line-out) and stuff like that. Coming into England I just need to keep building on that, improving my own game and that’s the best thing about this tournament; you’ll come out of this a better player and take learnings from it.”

Richards concluded: “It has been a tough season with Covid so to have been given the opportunity to have played in a couple of Premiership games and then go into the Under-20 games, I’ve been quite lucky. There has been a of hard work but at the same time I’ve been fortunate to play in games this season to be prepared for this.

“This is only one box ticked. I want to keep pushing on, be the best player I can be and hopefully play for Bath more frequently next season.”