One of Wales’ most respected looseheads, Jenkins has so far won 129 caps for his country, which makes him the most capped Welshman in history. He featured in the 2005, 2009 and 2013 British and Irish Lions Tours.

Adam Jones has 95 caps to his name for Wales and featured in the 2009 and 2013 British and Irish Lions Tours. He spent the majority of his career at Ospreys, before briefly spending time with the Cardiff Blues and Harlequins.

Johnson is widely regarded as one of the greatest locks to have ever played the game. As a player he famously led England to glory at the 2003 Rugby World Cup and also captained the British & Irish Lions in 1997 and 2001. He was also part of two Grand Slam-winning England sides in 1995 and again as captain in 2003. On the domestic stage he played all his club rugby for Leicester Tigers, making a total of 307 appearances. During his 16-year career at Welford Road he led them to back-to-back Heineken Cup titles in 2001 and 2002 and also five Premiership titles including four in-a-row between 1998-99 and 2001-02.

Collins won 48 caps for the All Blacks having made his debut in 2001, scoring five tries during a career that saw him become one of the most feared back-row players on the pitch due to his sheer strength and physicality.

Widely rated as one of the world’s best-ever back row forwards, he was a key member of England’s World Cup-winning squad in Australia in 2003 and the only player to play in every minute of the memorable campaign. Lawrence also featured on three British and Irish Lions tours and was inducted into the World Rugby Hall of Fame in 2016. At domestic level, Lawrence was a one-club man with Wasps, picking up five Aviva Premiership titles along the way, as well as three Anglo-Welsh Cups and two European Rugby Champions Cups in his 18-year career.

Combining both pace and strength to devastating effect, add to that near-perfect kicking, passing and defensive games, as well as a keen eye for the try line, and you can see why Edwards invariably tops the polls in any vote for the greatest player of all time. Edwards played for his country on 53 occasions between 1967 and 1978, scoring 88 points. Edwards also captained his country 13 times. Wales' domination of the Five Nations was complete during Edwards's career, when he helped them to win the title seven times, with three Grand Slam seasons. In addition to his 53 Wales caps he made 10 appearances for the British & Irish Lions, featuring on the 1968, 1971 and 1974 tours.

Jonny Wilkinson will forever be remembered as the man who kicked England to Rugby World Cup glory in Australia in 2003 - slotting a last-gasp drop goal in extra-time to edge out the hosts in a thrilling tournament finale. That moment is just one highlight of a record-breaking career that has seen Wilkinson rise to one of the sport's all-time greats. He won 91 caps for England between 1998 and 2011, scoring over 1,100 points during that time. He spent 12 seasons with the Newcastle Falcons, where he won the Premiership in 1998, before moving to Toulon. During his five year spell at the French club he won the Champions Cup on two occasions and the Top14 title. Named both World Rugby Player of the Year and BBC Sports Personality of the Year in 2003.

Arguably one of the greatest players ever to step on a rugby field, Lomu was one of the most devastating players of his era. Weighing in at 120kg, Lomu was a formidable force on the wing, scoring 37 tries in 63 appearances for his New Zealand.

Conrad Smith is a throwback to the centres of old. He possessed an eye for the gap unlike many others in the game, frequently being seen ghosting past defences with ease. His quality handling and kicking game made him the complete attacker, frequently creating space for wingers around him. Smith retired from Test Rugby after the 2015 Rugby World Cup and ended his international career with 94 Test Caps, 2 Rugby World Cup Titles and 26 tries.

Williams is the record try scorer for Wales, and is fourth on the international list of leading rugby union test try scorers behind Daisuke Ohata, David Campese and Bryan Habana. He is Wales' most capped winger with 87 to his name. In 2008, Williams was selected as the World Rugby Player of the Year. Renowned for his pace, side-step and runs, he went on to become one of the best wingers in world rugby and one of Wales' all-time greats.

Matt Perry is a man who Bath Rugby supporters will remember with fondness for eternity. He proudly won 36 caps for England, three for the Lions in Australia in 2001, and made an eye watering 221 appearances scoring 561 points for Bath Rugby between 1995 and his enforced retirement in 2007, at that point the Club’s longest serving player. A third generation Club man to the core, wearing the shirt after father Brendan and grandfather Idris, he was  of course part of the 1998 side that first won the Heineken Cup on behalf of British clubs. 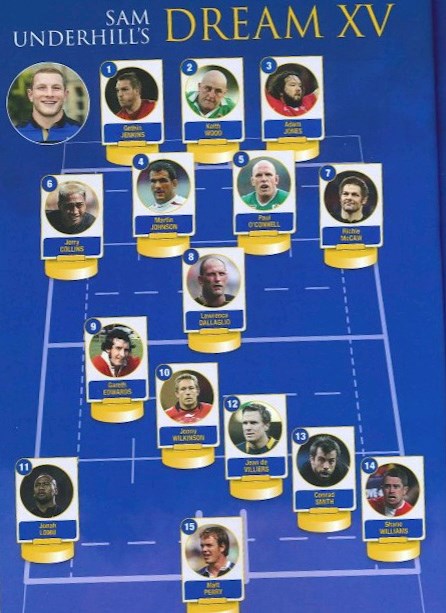