Take a look at who Bath Rugby flanker and South African international Francois Louw has picked in his all-time Dream Team.

Os du Randt spent the majority of his career in his native South Africa. He made 80 appearances for the Springboks and was part of the 1995 World Cup winning squad. His final appearance for South Africa came in the 2007 World Cup final, which they also won – making him the only South African to have two World Cup winners’ medals.

Hayman won 45 New Zealand caps with his staggering power, which would live long in the memory of adoring fans. He spent three years at Newcastle Falcons before joining Toulon, where he won three consecutive European titles.

No rugby player has played more for South Africa than Victor Matfield, who was arguably the best lock in the world during his decade playing Test rugby. Matfield appeared in three World Cups and earned numerous accolades through his consistently strong performances at all levels of the game. He was also a very strong leader and captained the Springboks many times.

Collins won 48 caps for the All Blacks having made his debut in 2001, scoring five tries during a career which saw him become one of the most feared back-row players on the pitch due to his sheer strength and physicality.

A World Cup winner in 2007, Schalk Burger is renowned as one of world rugby’s finest back row players having enjoyed success at both international and club level. Burger was part of the Saracens side that defended the Champions Cup title in 2016. He has won 86 caps for South Africa, winning the World Cup with the Springboks in 2007. He was also named World Rugby Player of the Year in 2004.

Chabal spent five years at Sale Sharks, and won 62 caps for France from 2000-2011. He is known for his full beard, long hair and ferocious tackling, leading the French rugby fans to nickname him l'Homme des Cavernes — the Caveman.

Arguably one of the best scrumhalves ever to play for South Africa, Fourie du Preez played a central role for the Springboks after making his Test debut in 2004 and was twice named the SA Rugby Player of the Year. Du Preez has a great kicking game, while his decision-making and option-taking are seldom less than exceptional. He was one of the Boks’ kingpins when they won the Rugby World Cup in 2007.

Spencer was praised for his creative style of play throughout his career and retired with 35 Test caps for New Zealand and scored 291 points. He spent four years at Northampton Saints during his club career, and also had a spell with Gloucester Rugby.

Noted for his acceleration, side step and ability to beat defenders, Robinson is classed as one of England’s greatest wingers. A deadly finisher, he won 51 caps for England and scored a try in the 2003 World Cup final, which England went on to win. He played for Bath in 1996 before moving onto Sale Sharks, where he stayed for seven years. He represented the British and Irish Lions on two Tours in 2001 and 2005.

Acknowledged as one of the hardest tacklers in the game, former All Blacks captain Tana Umaga was one of the most respected players in world rugby. In 2004, Umaga became the first New Zealander of Samoan heritage to captain the All Blacks in a Test, and went on to win 74 caps and score 185 points for his country.

With 46 tries in 58 Tests, Cullen was nicknamed the Paekakariki Express and considered to be one of the most potent running fullbacks rugby has ever seen. He played much of his club career in New Zealand, but did move to Munster towards the end of his career. 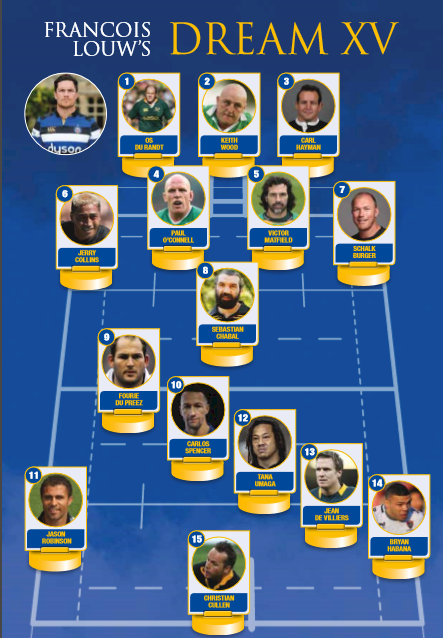