Bath Rugby Women’s Sevens took part in their first ever tournament on the weekend and delivered a promising set of results.

As the first Women’s team to be formed at Bath Rugby, the Newbury Sevens tournament saw the squad meet some strong and well-established teams in Pool A, including Army Reds, Lionesses and Samurai RFC.

Bath took on a tough side in Army Reds in the opening round and took a lead into half-time with two tries from captain Thea Thompson. In the second half, they faced a re-energised Army outfit who quickly got a foothold in the game to secure a 31-12 win.

Up next for Bath were the Lionesses, where the team fought to victory and saw them secure their first win of the tournament scoring 17 points to the Lionesses’ 12. Welsh speedster Bethan Wakefield scored two tries with Megan Barwick adding a third.

In Round Three, the Blue, Black and White came up against a tough Samurai RFC side who showed their experience in the Sevens game. Wakefield was able to make a break to score her third try of the day but it proved a consolation in a 42-7 loss.

Bath were awarded a 21-0 walkover with an opponent failing to show and combined with their win over the Lionnesses, it advanced them into the Plate semi-finals against the Wooden Spoon Marauders. Maria Crowfoot’s side produced a spirited, five-star display with Barwick, Wakefield, Robyn Price and Thompson all crossing the whiteash in a well-deserved 31-15 victory.

Progressing to the final, Bath went head-to-head against a dominant and solid Savvy Panthers.. Despite the girls’ best efforts, the Panthers were too tough to breakdown and saw the final go the opposition’s way ending in 24-5.

For a team who were grouped together a month ago, Bath showed pride, passion and a lot of cohesion throughout the whole tournament. Women and Girls Rugby Development Lead, Crowfoot, was proud of their proud of their performance.

“Hopefully what comes through in our performance is a team that really enjoys their rugby,” she said.

“We’ve scored some really good tries and that’s what we want. We want every game to be as enjoyable as possible.

“When you think this team has been selected off the back of one, maybe two trials and only had a short period of training time, they’ve really gelled and stuck together.

“History has been made. To reach a Plate final is a great effort from a team who has only played together a handful of times. All of this will help us progress as we head to the South Island Sevens this weekend.

“This is just the start for this Bath Rugby team – watch this space!”

POL ROGER PLAYER OF THE TOURNAMENT 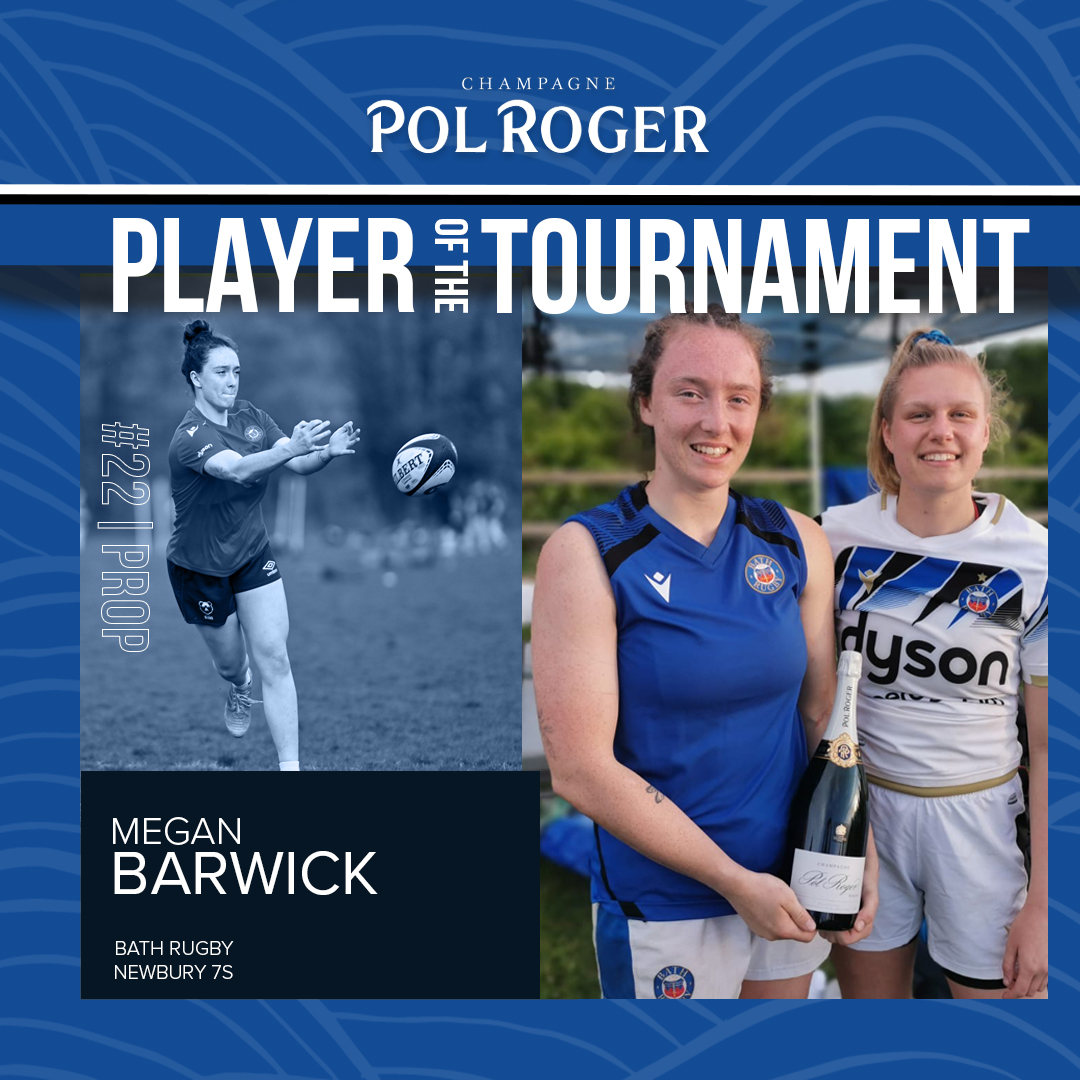 Bath Rugby Women’s Sevens’ Pol Roger Player of the Tournament was handed to England Under-20 international Barwick, with Crowfoot adding: “Megan really showed up and I think ultimately it was her work-rate that set her above the rest of the team.

“She shone in defence and had moments of brilliance in attack as well. In the last game she played almost the full 14 minutes, which of course in Sevens and at the end of a jam-packed day of rugby is no mean feat.

Barwick, who this season crossed the West Country divide to join Bath Rugby Ladies from Bristol Bears Women, was quick to praise the team and staff around her after collecting the accolade.

“The moments where I feel like I was successful came off the back of the hard work everyone around me has put in,” she said.

“It’s a real buzz to be out there on the pitch with a group of players with such positivity. To be awarded Player of the Tournament, especially as it’s decided by the captain and coaches is really special.

“There have been so many positives in this tournament, and even the negatives didn’t bring us down. We’ll use them as learning points and take them into the next leg at South Island Sevens.”

This was the first time Bath Rugby Women’s Sevens have participated at an elite level and the team are hopeful they can build and deliver more exciting performances moving forward.