Bath Rugby is pleased to confirm dates, times and TV picks for their fixtures against Leinster Rugby and La Rochelle in this season’s Heineken Champions Cup.

The Blue, Black and Whites will travel to four-time European Champions Leinster Rugby in Round 1 on Saturday 11th December before hosting 2020/21 runners-up La Rochelle a week later, on Saturday 18th December.

The French side will then host Bath in Round 3 on Saturday 15th January 2022 before the group stage ends with Leinster Rugby visiting the Rec on Saturday 22nd January 2022. 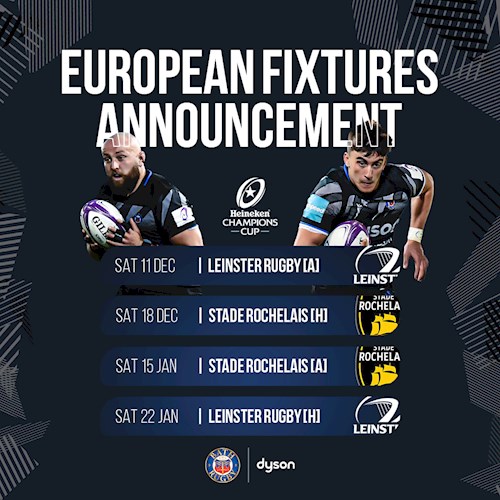 WHO ARE OUR OPPONENTS?

Winning the Heineken Champions Cup three times in four seasons between 2009 and 2012, Leinster have great pedigree in the competition. Their last title came in the 2018 campaign before suffering a loss to Saracens in an epic battle a year later. Leo Cullen’s side also have a heavy focus on doing well in Europe with many high-profile Irish internationals in their side aiding their cause.

Ronan O’Gara is building a special culture at La Rochelle which contributed in Les Corsaires reaching the Heineken Champions Cup final last season for the first time. They also progressed to the TOP 14 final too, and although they suffered defeat at the hands of Toulouse twice, they proved a force to be reckoned with, securing impressive European wins over Leinster and Sale Sharks on their way to the 2021 showpiece fixture at Twickenham.

STRUCTURE OF THE TOURNAMENT

The Heineken Champions Cup will once again be competed for by 24 clubs, with eight representatives from the Gallagher Premiership, the Guinness PRO14 and the TOP 14 having secured their places.

The clubs have been divided into two pools of 12 – Pool A and Pool B - by means of a draw and the tournament will be played over nine weekends with four rounds of matches in the pool stage starting in December when Toulouse begin the defence of their title.

The eight highest-ranked clubs from each pool will qualify for the knockout stage which will consist of a Round of 16 on a home and away basis, quarter-finals, semi-finals and the final in Marseille on 28 May 2022.

Matchday hospitality for Gallagher Premiership matches is now on sale.

For Heineken Champions Cup enquiries, please register your interest by clicking below.

We are currently gathering interest for our annual European away trip. If you would be interested in joining us when we travel to the Stade Marcel-Deflandre to face La Rochelle in Round 3, please register your interest here:

Ticket information for the European games will be released in due course but Bath Rugby's next two home matches against Saracens and Wasps in the Premiership are now on general sale with the third against Exeter Chiefs due to go on general sale at 10am on Monday 11th October.