This season has seen many of Bath Rugby’s players achieve milestones in Blue, Black and White.

Seven players from the pathway have represented the senior team in either the Gallagher Premiership or European Challenge Cup for the first time while seven players earned their first Bath caps.

A further four reached 50 appearances for the club and another quartet became Bath centurions.

We take a look at all the achievements of our players this term. 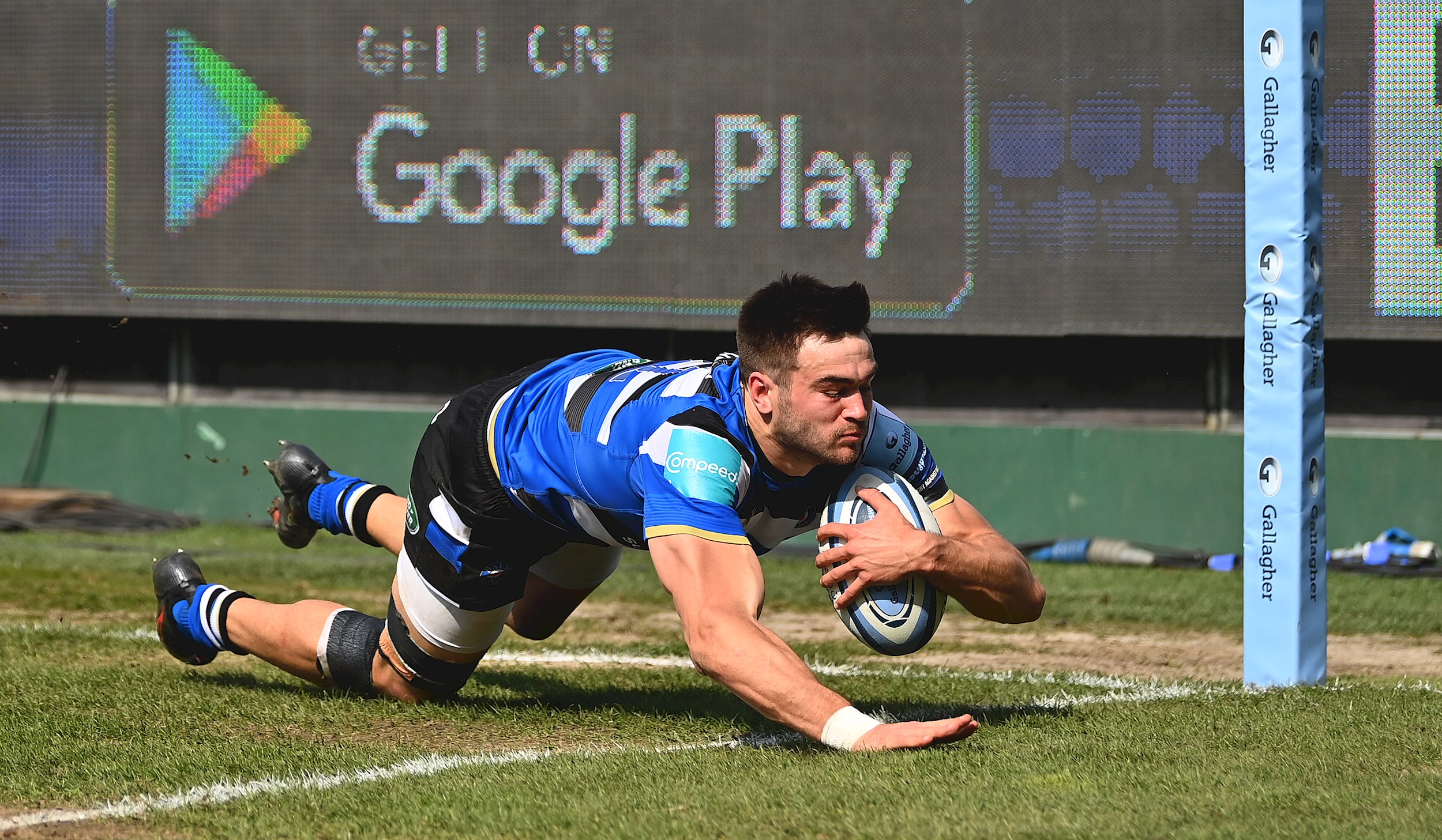 Academy fly-half Orlando Bailey converted a second-half Tom Dunn try against Worcester Warriors for his maiden Premiership points. He added a further nine from the boot on his second league start at Wasps.

Jacques du Toit introduced himself to the Bath public with a try on his debut. Coming on as a replacement in the Italian sun against Zebre, the hooker controlled the direction of a maul tight to the touchline, marching his way to the line before flopping on the ball in the corner.

Bath’s joint-top try scorer for the year, Will Muir grabbed his first Premiership tries against Worcester Warriors, with his second earning him the Try of the Season award. The wing has scored seven in 13 league appearances for Bath since switching from Sevens to XVs.

Cameron Redpath drove over from close range for a try away to Leicester Tigers in January. The Scotland centre added another to his tally a week later at home to Wasps - a beautiful solo score – and made it three for the campaign against his former club Sale Sharks.

Despite joining as a 14-year-old, Miles Reid had never scored for Bath Rugby so it was an extremely proud moment for the homegrown flanker against Leicester Tigers. He burrowed over late on to contribute to a big win in a fixture with rich history. He then followed up with a second a week later at Wasps!

On his first start at fly-half, Tian Schoeman nudged two conversions in tricky conditions at Newcastle Falcons. His four points contributed to a fantastic victory at Kingston Park – a venue Bath hadn’t previously won at since 2015. 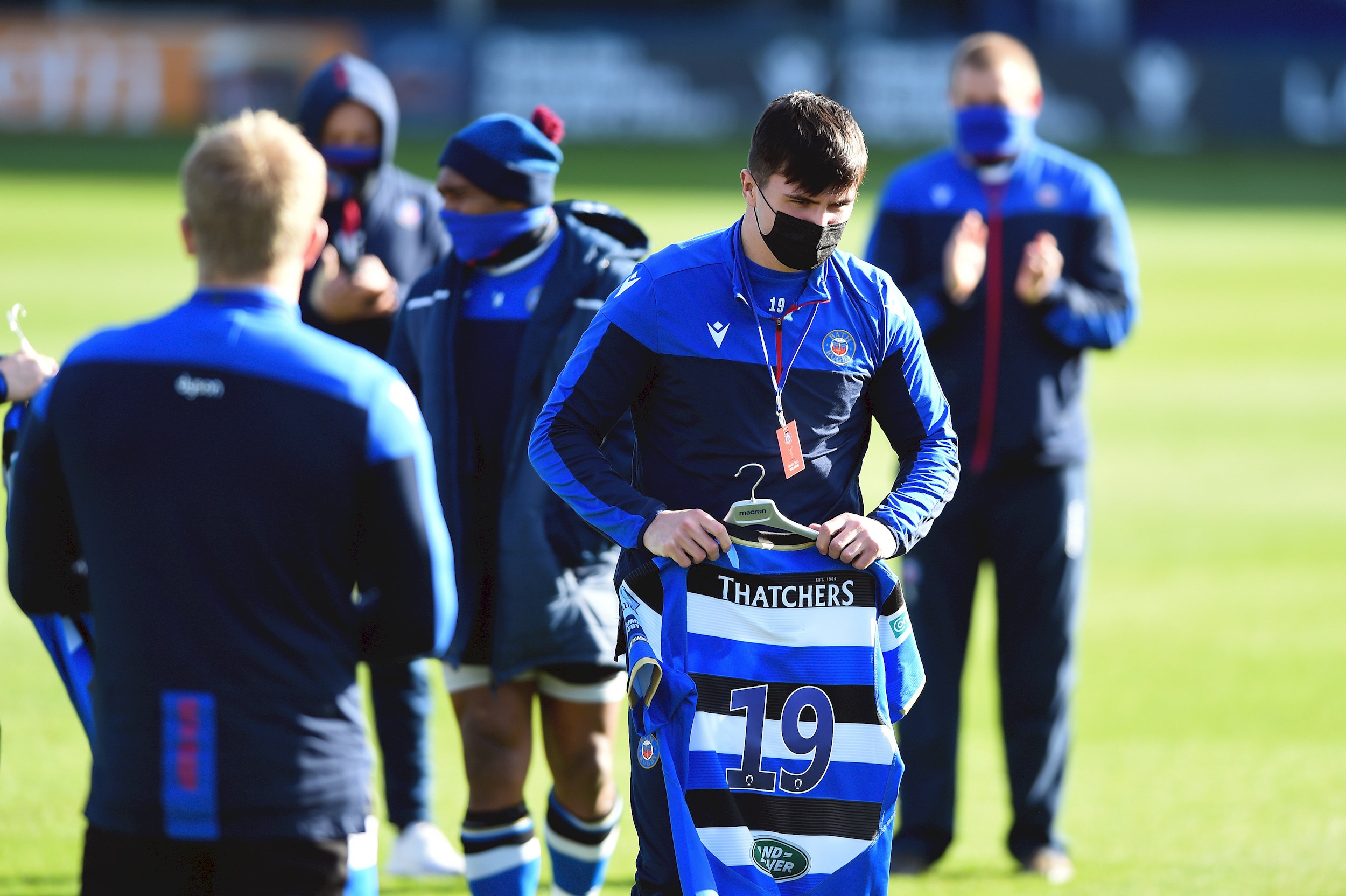 Joining as injury cover in December, Jamie Bhatti's efforts over his six months at Bath Rugby saw him earn a recall to the Scotland squad in the Six Nations. The prop will also feature for his country this summer after finishing the campaign with 10 Bath caps to his name. Bhatti came away at Bristol Bears and he earned his first start on his final appearance away to Harlequins.

Jacques du Toit linked up with Bath in January, joining the club from Super Rugby franchise the Cheetahs. The hooker spent a period in isolation with his family after arriving in the UK from South Africa before joining the rugby programme, taking some time to understand the club’s processes. His first opportunity to wear Bath colours came in the Challenge Cup against Zebre where he came on late in Parma, crossing for a try to seal progression to the quarter-finals.

Alex Gray made his Bath debut in Round 9 of the Gallagher Premiership, away to Sale Sharks. The versatile back described his first cap as ‘a cool feeling’, after taking unusual route to the Rec. Formerly a back row with Newcastle Falcons and London Irish, he spent time in the England Sevens programme before a brief spell at Yorkshire Carnegie. Gray then moved out of his comfort zone to take on a new challenge in the NFL with Atlanta Falcons. After two fantastic years, the County Durham-born flyer transitioned back to rugby, earning a chance at Bath.

More commonly referred to as Horse for his long, rangey gallop, Will Muir has made quite the impact since switching England Sevens to XVs with Bath Rugby. The wing joined in the summer of 2020 and bided his time, learning the skills and attributes needed to transition seamlessly into the 15-a-side game. His first outing came in February at home to Harlequins with his first tries following a month later. In his 13 games to date, he has seven tries in a Bath shirt.

Senior Academy lock Ewan Richards has demonstrated his many strengths on the field at Academy level over the past few years and earned his opportunity to step up against Harlequins during the Six Nations period. An unassuming and humble young man, the 19-year-old came on twice in the game, first replacing Miles Reid in the first half, before ending the contest by replacing another homegrown talent in Ethan Staddon. Richards clearly relished the chance to pull on the colours of his boyhood club for the first time in a senior environment.

Another to make his debut in the Six Nations period, Tian Schoeman came on against Harlequins on the hour-mark and displayed some nice touches whilst showcasing his running ability. The South African, who joined from the Cheetahs, earned his first start at full-back before a shot at fly-half on the road against Newcastle Falcons where he collected his first points for the club. He unfortunately injured his ACL that day but with the help of the medical department, will come back stronger from it.

A consistent operator within the Academy, Ethan Staddon has featured five times in total for the senior team this season, earning his first opportunity as a replacement against Worcester Warriors in November 2020. The powerful back row actually replaced wing Ruaridh McConnochie at Sixways but was relentless in his defensive efforts making eight tackles in 13 minutes on the field to help Bath record a 33-17 victory.

Special mentions to Orlando Bailey, Arthur Cordwell, Tom Doughty, Max Ojomoh and Miles Reid who all debuted in either the Gallagher Premiership or European Challenge Cup. All five players have progressed through the Bath Rugby pathway. 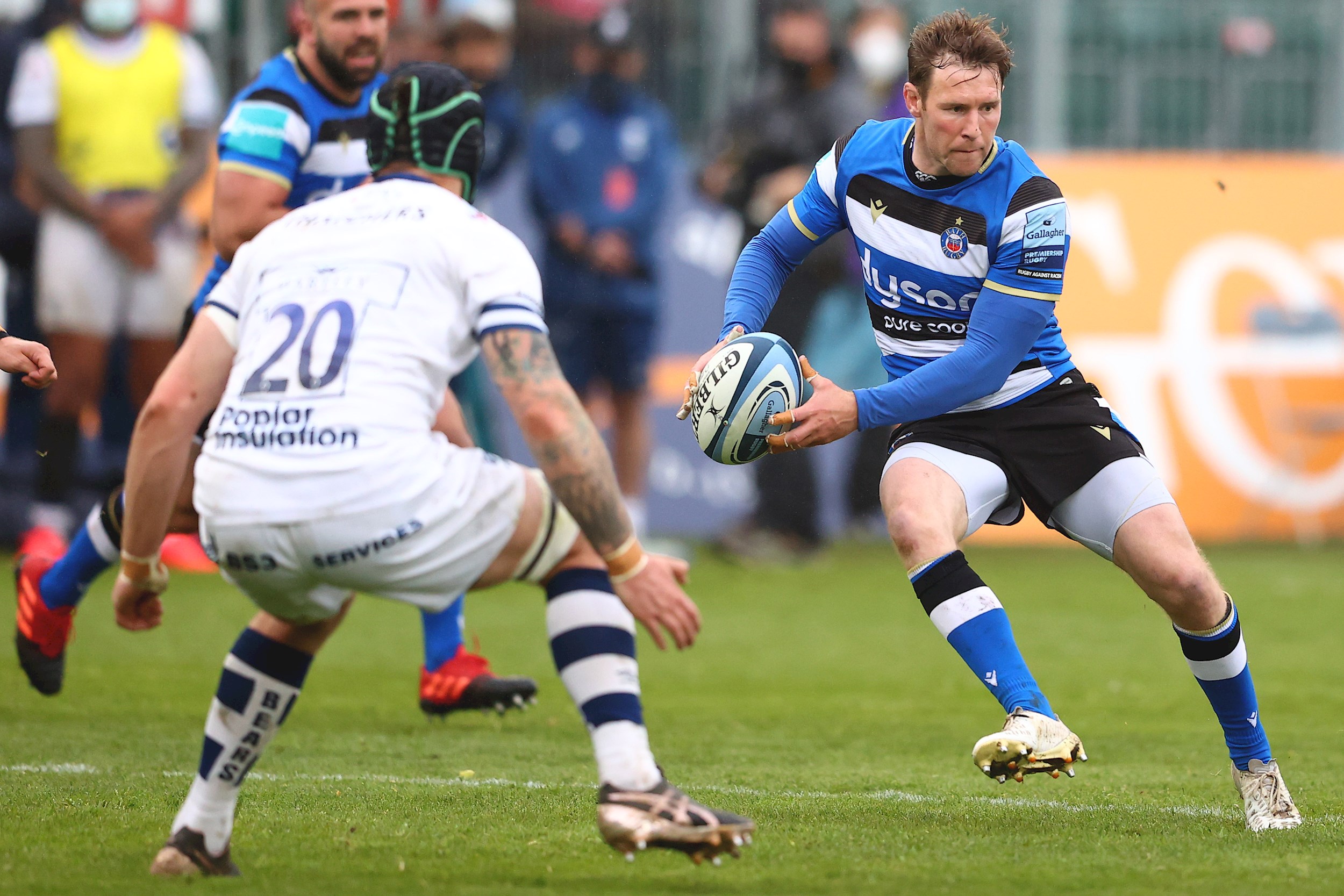 Will Chudley has been an impressive leader within the playing group since joining Bath from Exeter Chiefs in 2018. He made his debut against his soon-to-be new club Worcester Warriors and scored his first try after four games. The scrum-half made 18 appearances in all competitions in his first season and followed up 21 in his second. This term Chudley reached 50 in Blue, Black and White at the Rec facing his ex-club Exeter. He departs the club having made 55 appearances in total. 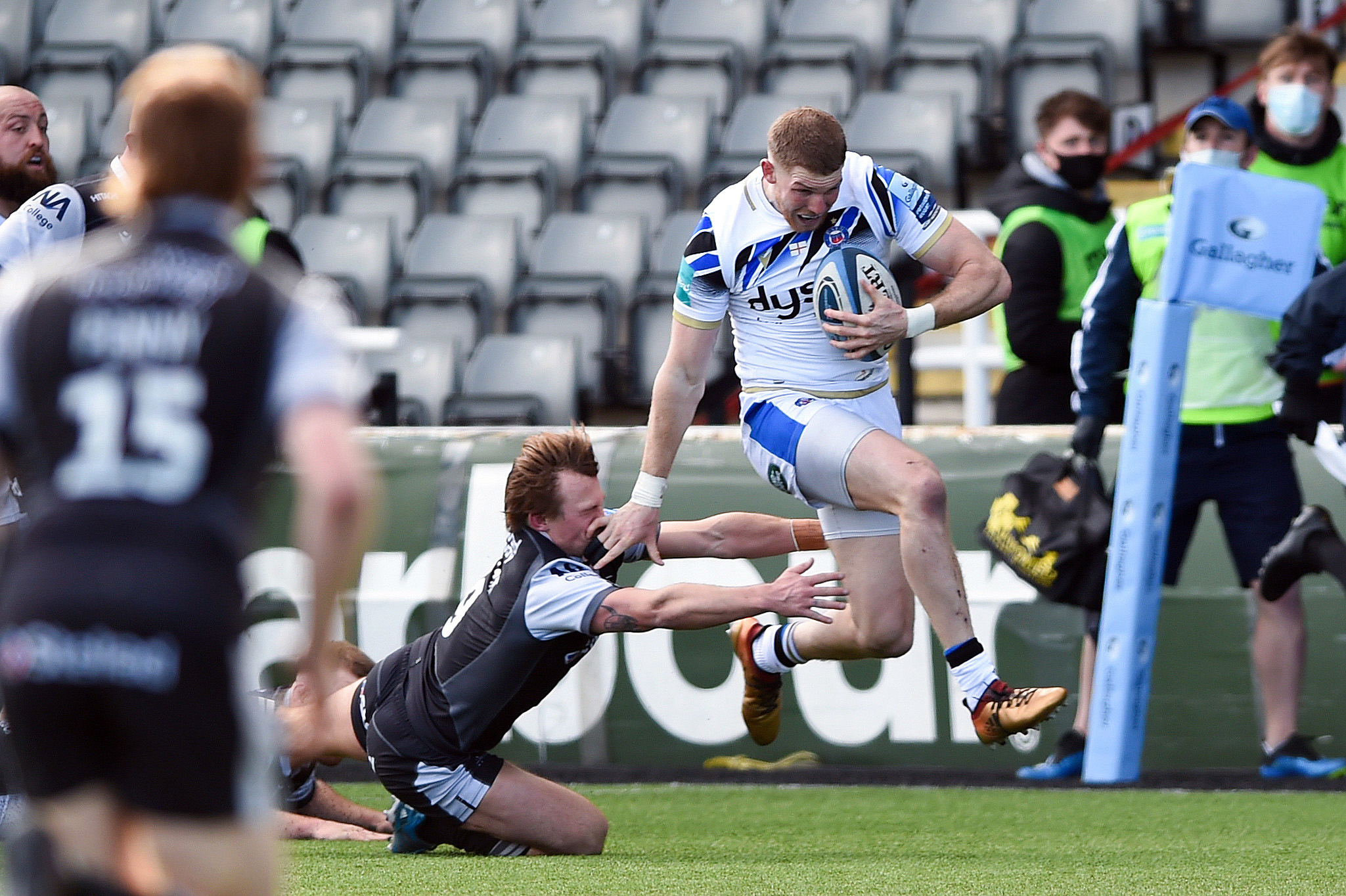 A trip to Newcastle Falcons in March saw Ruaridh McConnochie make his half-century for the club. The wing has had a fantastic rise in the XVs game since transitioning from Sevens, earning England, and Rugby World Cup, recognition at the end of his debut year. His strike rate in his second year was fantastic as he scored nine times in 14 Premiership appearances, as well as a further two tries in Europe. After his milestone at Falcons, McConnochie unfortunately only managed two more games in 2020/21 before injury cut his campaign short. 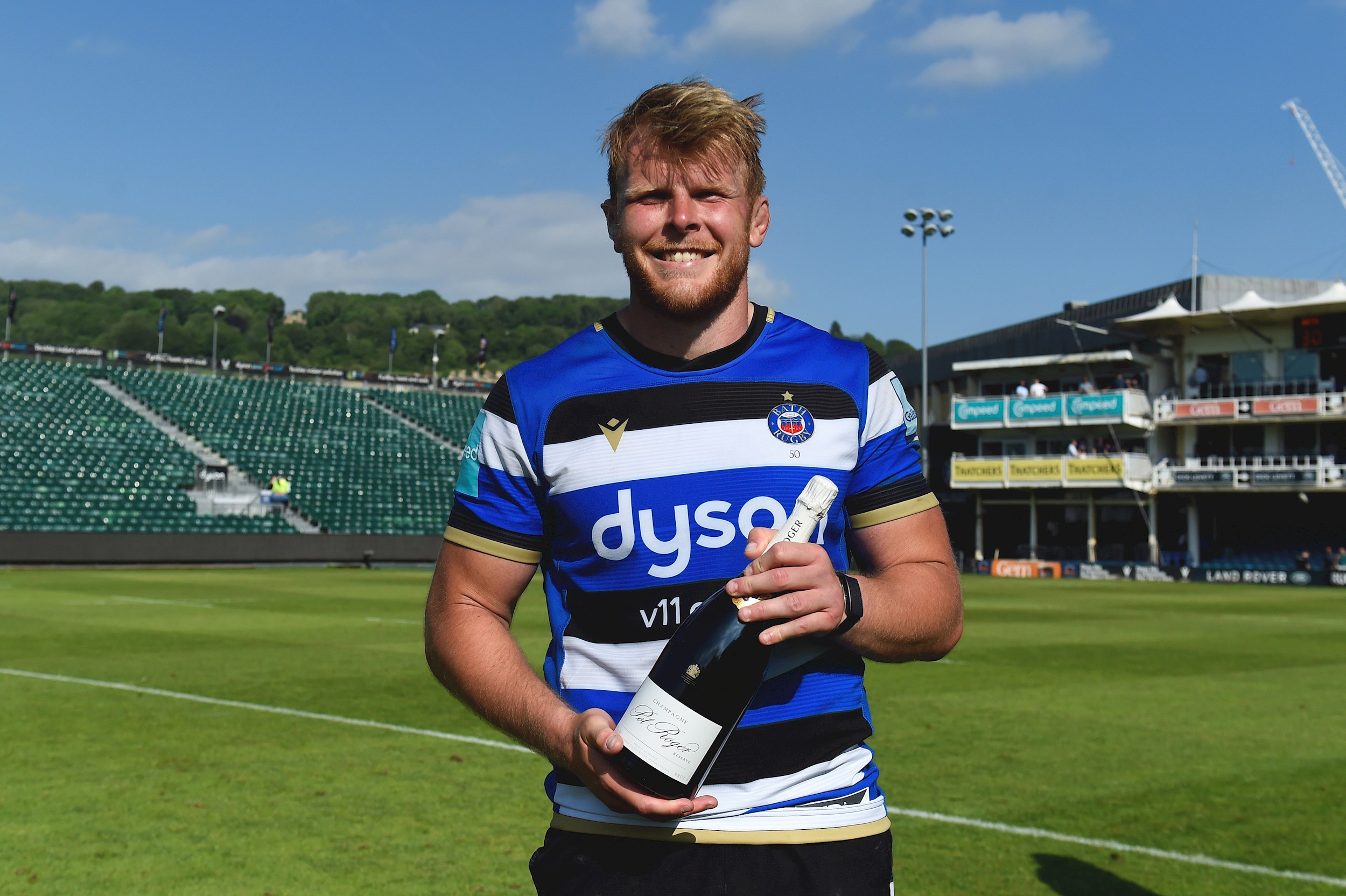 A reliable player in the pack, Josh McNally’s performances this season were recognised by Bath Rugby as he earned the Best Forward award. The second row ended the campaign on a high by reaching 50 club appearances in Round 22 of the Gallagher Premiership, two years after joining from London Irish. He has been a consistent performer since arriving at the Rec, thus his achievement playing his 50th Bath game in such a short space of time. He marked the occasion by winning the Pol Roger Performance of the Match! 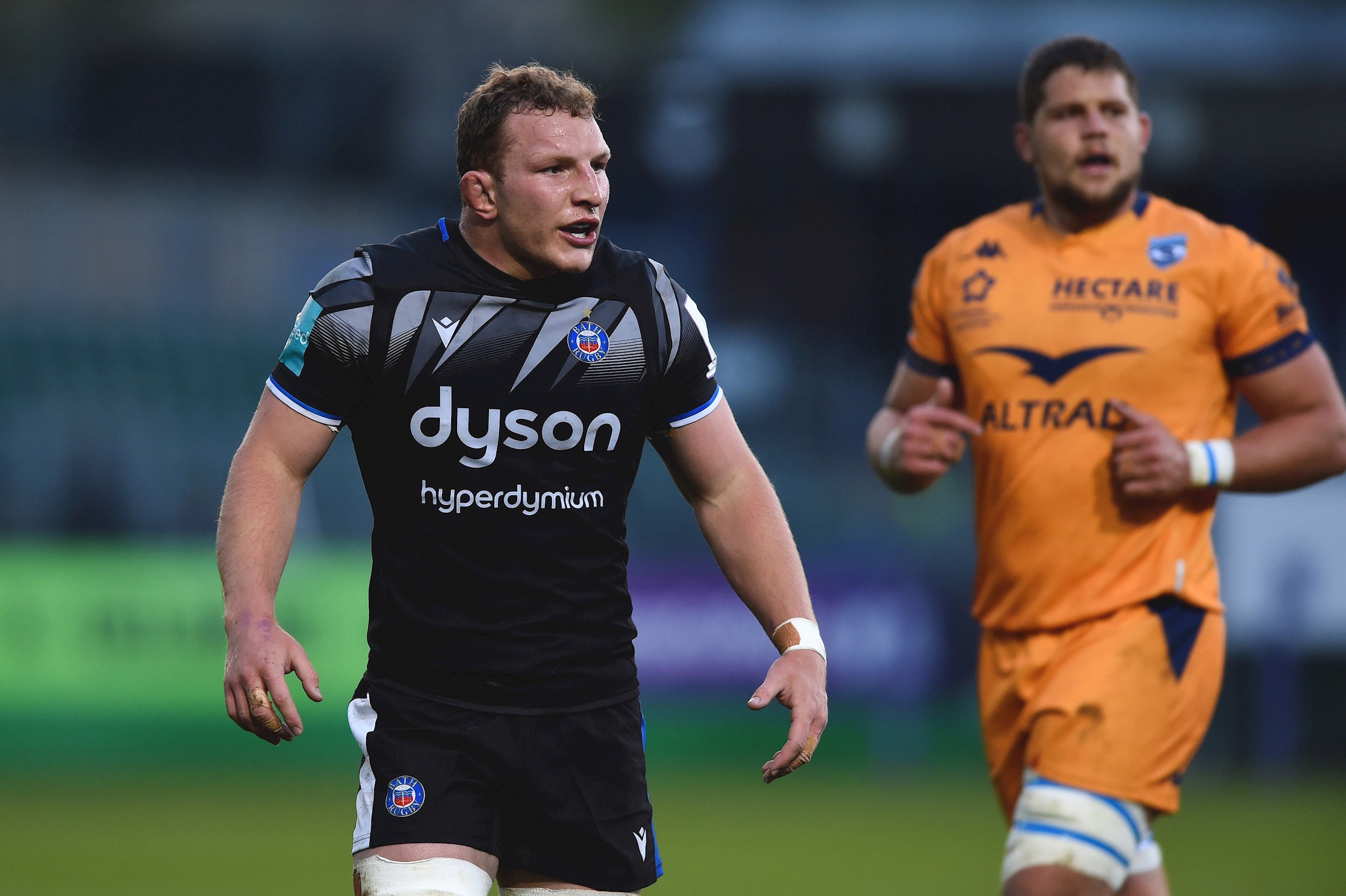 Sam Underhill has performed to extraordinary levels since joining Bath Rugby and that has been acknowledged by the number of Bath and England caps he has won in the past four years. A menace at the breakdown, the 24-year-old scored his first two Premiership tries this season, but it was in the Challenge Cup semi-final which he ran out for the 50th time in Blue, Black and White. Underhill enjoyed 50 minutes against Montpellier, winning one turnover and making 11 tackles. 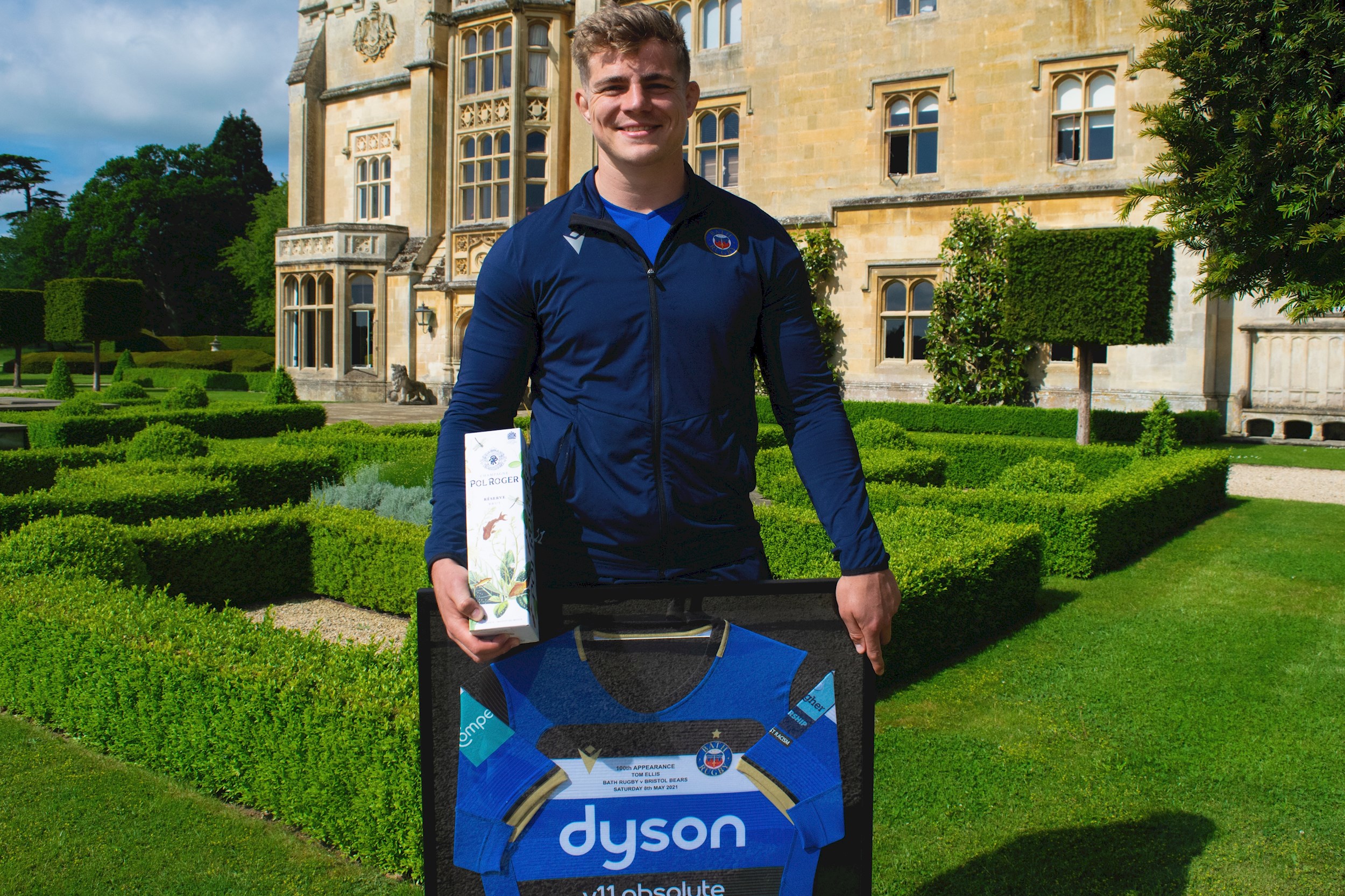 Homegrown versatile forward Tom Ellis experienced the proud moment of becoming a Bath Rugby centurion against local rivals Bristol Bears in May. The 26-year-old made his Blue, Black and White debut in 2014 alongside Charlie Ewels and his first Premiership was next to now Director of Rugby Stuart Hooper in the second row. He has worked hard to overcome a number of injuries on his journey to 100 games and is grateful for the support he has received from friends, family and everyone at the club. 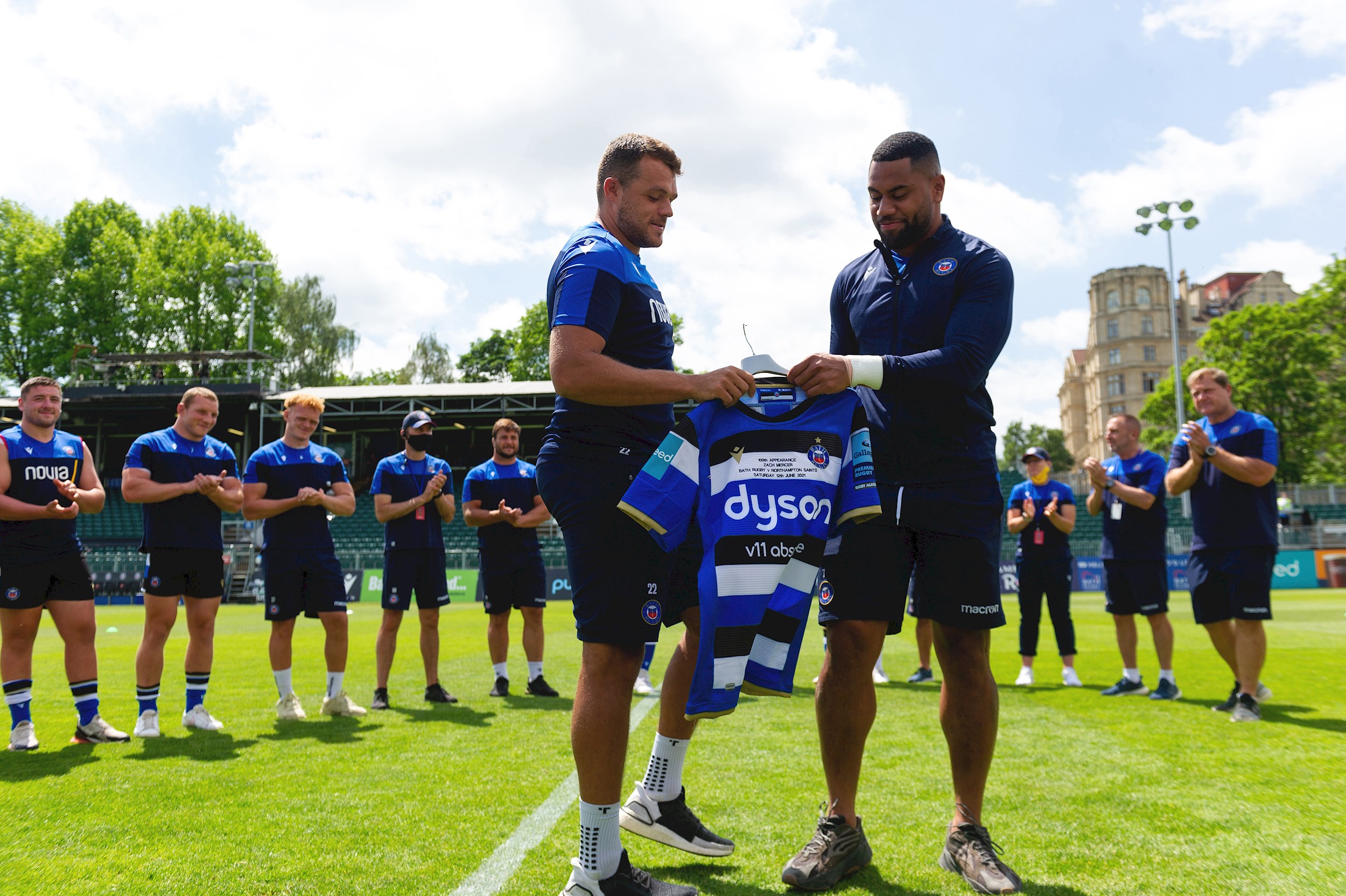 One hundred and out. Zach Mercer managed to bid farewell to Bath Rugby in front of the supporters on Saturday, coming on as a replacement against Northampton Saints. In his five years at the Rec, he has developed into a talented attacking player capable of scoring tries as well as tough tackler in defence. He won the April Gallagher Premiership Player of the Month award and has put in a number of man-of-the-match performances this season. 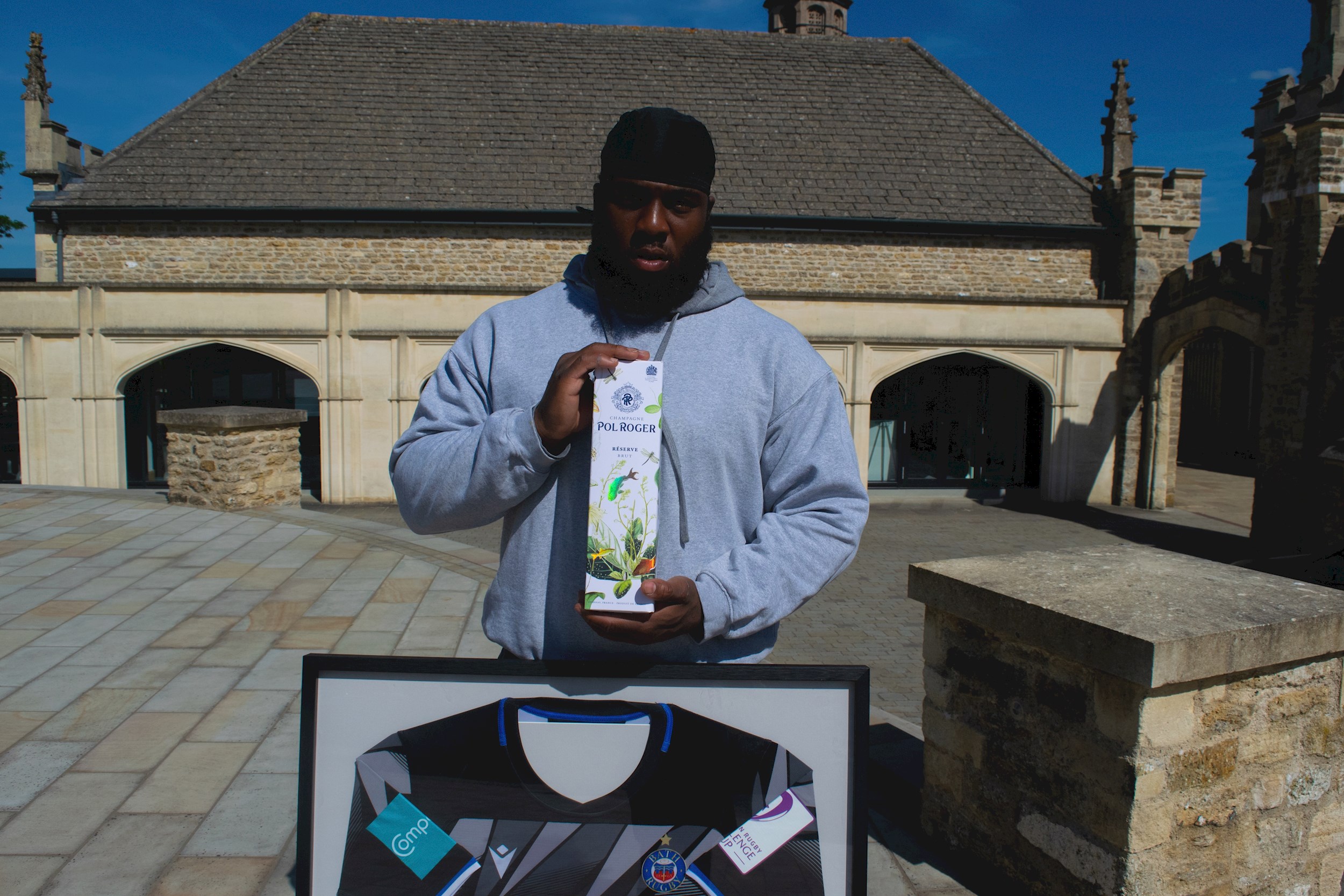 Beno Obano’s artistic personality has seen him thrive since arriving at the Rec in 2014. Initially, he was brought in for an A League match before being challenged to a pre-season in Somerset. Challenge accepted. Challenge achieved. The loosehead prop was rewarded for his efforts with an Academy contract, debuting in the Anglo Welsh Cup before a couple of 2014/15 Premiership outings. He has gone on to earn England recognition and achieved his 100th Bath cap in Italy against Zebre, a moment he is incredibly proud of. 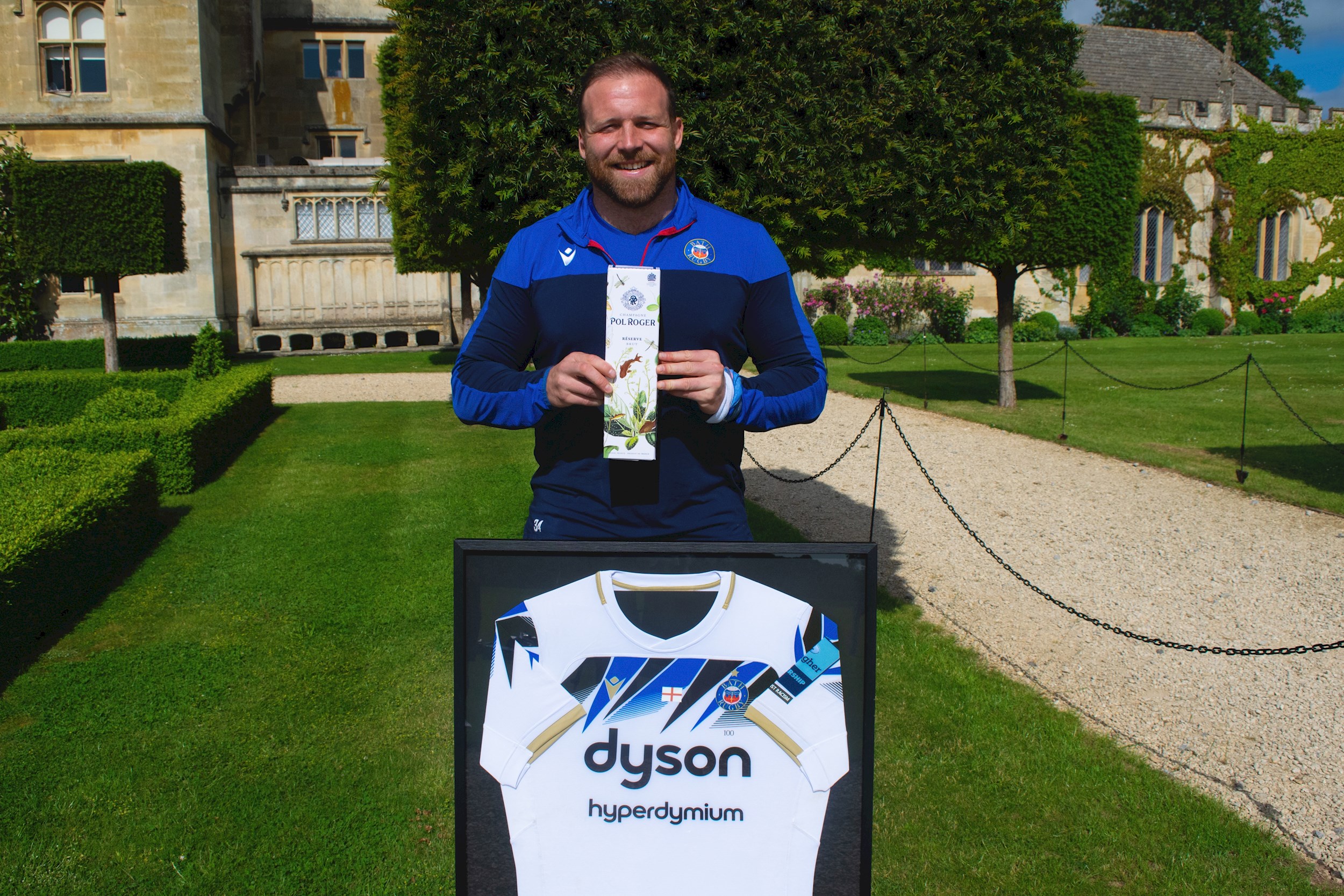 Henry Thomas is another to have made over 100 appearances for his boyhood club. The prop used to attend games as a child whilst playing for Bath RFC and even ran out as mascot at the Rec. He departs the Blue, Black and White this summer after seven years of putting blood, sweat and tears into the shirt and reached his milestone in November 2020 at Sandy Park against Exeter Chiefs.

Dunnie reached the incredible milestone of 150 games for the club

Somewhat of a fan favourite, Tom Dunn has enjoyed over a decade at Bath Rugby and his achievement of reaching 150 games for the club (away to Wasps in the Gallagher Premiership) is astonishing given his age of 28. His development with the Blue, Black and White since his debut in 2012 has been enormous, earning his first England cap in the 2020 Six Nations. He has learned from many experienced hookers in his time and is now one of the group’s leaders. Not only has Dunn made huge strides on the field, he has already began thinking of life after rugby and was awarded the Vodafone Gain Line Award for embracing his off-field development.