Bath Rugby is pleased to confirm its squad for the 2021/22 season.

Bath Rugby welcomes four players and a new Attack and Backs Coach into the squad for the new campaign.

Danny Cipriani and Jaco Coetzee have already experienced life at Farleigh House, expanding their knowledge of how the club works on and off the field over the past few months.

Sixteen-time capped England international Cipriani will add a fresh attacking perspective to the Bath backline, forming exciting relationships with the talented players already at the club whilst helping to develop the younger players in the Blue, Black and White’s Senior Academy and senior squad.

South African back row Coetzee has settled into life well at Bath and has a clear focus of performing to high standards on the field. He brings significant attacking capability as a destructive ball-carrying Number 8 and will add further dominance to the squad as it evolves its attacking game.

Props Johannes Jonker and D’Arcy Rae have the right attributes on and off the field to add positively to the tightheads already at the club. Both extremely driven to improve the team as well as develop as individuals, Jonker has a devastating combination of high-tempo play, destructive ball carrying and the ability to be a solid anchor at scrum time. A seasoned scrummager and dominant defender, Rae is renowned for his physicality at set piece and his exceptional rucking.

The news of coach Girvan Dempsey’s departure paves the way for David Williams, who will re-join Bath Rugby as Attack and Backs Coach. Formerly Academy Coach at Bath Rugby from 2012-2014, he has returned to England following a successful eight-year period of coaching attack within Super Rugby, Pro 14 and Top League. He is an innovative attack coach with a deep knowledge of the game and an excitement for playing with intent and using possession to pressurise teams.

“We are very excited by the new additions to the squad,” Director of Rugby Stuart Hooper said.

“They all complement our current structure whilst adding real excitement to what we are trying to achieve as a group.”

Three players from the Senior Academy will graduate into the Bath Rugby senior squad ahead of the 2021/22 campaign.

Homegrown trio Will Butt, Arthur Cordwell and Kieran Verden will make the step up and become fully-fledged members of the first team.

On the three players, Hooper said: “Their graduation continues the recent success of the Bath Rugby pathway. We have been really impressed by the current graduates in the squad with homegrown players such as Josh Bayliss, Tom de Glanville and Miles Reid deservedly progressing to earn international recognition.

“They (Will, Arthur and Kieran) are a great example of the hard work and dedication the Academy staff invest into young people every season and we’re looking forward to them thriving in the senior environment.”

Bath Rugby bids a heartfelt farewell to nine players following the conclusion of the 2020/21 season.

Longstanding hooker Ross Batty has retired from the game after spending over a decade at the Rec and will embark on a new chapter with Stonewood Builders this summer.

Prop Jamie Bhatti makes the switch to Glasgow Warriors after six months in Somerset while Christian Judge will remain in the Premiership with Worcester Warriors as will scrum-half Will Chudley.

After five years with the club, hooker Jack Walker departs for a new challenge with the remaining four players leaving as Bath Rugby centurions.

Rhys Priestland (Cardiff), Zach Mercer (Montpellier), Elliott Stooke (Wasps) and Henry Thomas have all made 100 or more appearances for Bath during their lengthy spells in Blue, Black and White.

Attach and Backs Coach Girvan Dempsey has taken up a new role as Head of Rugby at Colston's School.

All 10 have made an immense contribution to Bath in their own unique way, and everyone associated with the Blue, Black and White is extremely grateful for the energy and commitment they have given to the club.

“I would like to thank each of our nine departing players, and Girvan, for their unrelenting effort and commitment throughout their time at the club,” Hooper said.

“They are all fantastic people who have been a pleasure to work with and I wish all of them the very best of luck for what lies ahead.” 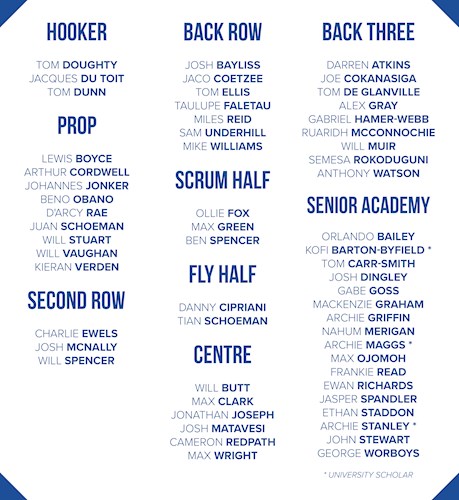