The competition will be tough from the outset, with Bath Rugby opening their campaign at the Rec against newcomers Newcastle Falcons on Saturday 21st November before travelling away to Exeter Chiefs in Round Two on Saturday 28th November.

The Heineken Champions Cup competition kicks off in mid-December, with Bath Rugby’s draw still yet to take place. The Premiership Rugby Cup will be staged as a midweek competition in the 2020/21 season and will be confirmed soon. The competition will start after the Six Nations, with matches live on BT Sport.

Only Rounds 1-6 have been issued BT Sport TV picks so far, with Bath Rugby featuring twice. More updates will follow throughout the new season.

Director of Rugby Stuart Hooper has his sights set firmly on the remainder of the 2019/20 campaign but believes the new fixtures display just how cut-throat the Gallagher Premiership can be.

He said: “Although our minds are firmly on how we can get what we need from our game at Allianz Park as we face Saracens on Sunday, we are excited to see the fixture line-up for the 2020/21 season.

“As ever the fixtures confirm just how competitive the competition is and we thoroughly look forward to working towards the next campaign upon the conclusion of this one.” 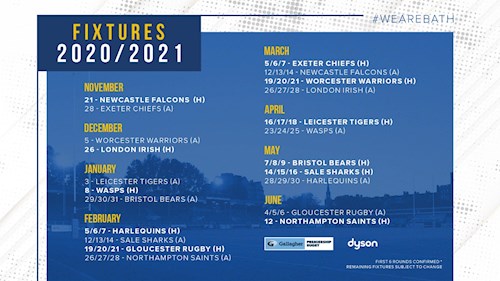