In what was penned as a friendly, Bath Rugby and the Barbarians fought right up to the last second in front of a crowd in full voice at The Rec.

Welcoming the side to the City of Bath for the first time in the professional era, Scott Robertson's pack were ready for the challenge and even brought Bath favourites, Matt Banahan and Elliott Stooke, with him.

Both fielding 24-man teams, the stand out performances came from Tom de Glanville who scored a beautiful try off the boot of Matt Gallagher, and the Barbarians back line, with Levi Aumua and AJ Lam scoring two tries each.

The match was physical, fast and full of tries. But it was the boot of Damian McKenzie that sealed the deal for the Barbarians with a drop goal as the clock sat in the red.

Tom de Glanville made a triumphant return to the starting XV after suffering a hamstring injury. Earning himself the fan's Pol Roger Performance of the Match, the fullback proved he was back to full fitness and put in a sterling performance.

With the Barbarians opting for a 24-man squad, Johann van Grann did the same and named Wesley White as his additional impact player.

Kicking things off in front of a jovial crowd, All Black Damian McKenzie sent the ball downfield into Bath’s territory for the BaaBaas to begin their attack.

The visitors got off to a quick start and sent the ball through their backline. Francois Houguaad soon broke through the line cutting through the home defence and assisted in giving the Barbarians the first points on the board thanks to Levi Aumua.

Biting back with a score of their own, it was another beautifully weighted kick from Matt Gallagher who was playing the advantage. Returning from injury, Tom de Glanville showed he is back to full fitness and chased the ball into Barbarians territory to claim it as his own and earned Bath their first score of the game, converted nicely by Orlando Bailey to bring the scores level at 7-7.

Play soon re-entered the Barbarians territory after Max Ojomoh chipped the ball through the BaaBaas line. In hot pursuit, Gallagher anchored Damian McKenzie before the All Black could put his foot on the gas. After regathering possession, Bath attempted to deliver a crash ball but couldn't gather cleanly enough and knocked the ball on.

Relentless on the attack, Bath came back at the BaaBaas once again through fly-half Orlando Bailey. Making metres and fending off the defence, Bailey sent a swift offload to Miles Reid who crashed over the line. Bailey finished off his try-assist and slotted the all between the posts for the extra two.

With momentum slowed and the rain thrashing down, it was much a game of back and forth leading up to the half hour mark.

Managing to pick up his second of the game, Aumua came through the line to intercept a floating Bath pass and swan dive over the whitewash in front of the South Stand to bring the scores level.

After a brief period of West Country rain, The Rec was soon basking in sunshine once again. Forcing a knock-on inside their own 22, Bath had a chance at reprieve in the danger zone. Forcing yet another knock-on it was all level at the break at 14 points a piece.

Heading back out for the second 40, the sun illuminated the bright array of colourful socks the Barbarians were sporting.

With cheers of ‘Come On You Bath’ echoing around the ground, Bath scored the first points of the half through the boot of Bailey giving the hosts a three point lead.

After a lengthy break by McKenzie who sent a looping inside ball to Levi Aumua, the centre thought he was on for his third but was dragged down by Bath’s formidable defence. The forwards were next to show what they were made of and forced the turnover on the Bath five metre line to rescue themselves from a sure score.

Bouldering himself through a series of defenders, AJ Lam was unrelenting in his attack using his long limbs to power himself over the line with the outstretch of an arm.

Spilling their bench onto the field, Bath made a series of changes to add a fresh addition of power to the game for the final 30.

Using the fresh legs, Bath were owning the Barbarians 22 and stopped them from leaving their own territory. With pressure being mounted on during multiple phases of play, fresh of the bench Joe Cokanasiga placed himself out on the wing and it wasn’t long before the pack spread the ball wide for the England wing to score.

With just one point in it, it was all to play for in the final 15 minutes. Lam replicated his last try with a second score and took the BaaBaas into a six-point lead.

The moment The Rec crowd had all be waiting for came as ex-Bath legend Matt Banahan removed his subs bib and headed onto the pitch for one last run in front of his faithful supporters.

Using a move straight from the training pitch, Bailey kicked a penalty deep into the corner for the forwards to drive a maul straight over the line through the hands of Wesley White. Going unconverted, the hosts trailed by one point.

Bailey slotted an important penalty at 78 minutes, but it proved not enough for Bath as the Barbarians star of the show, Damian McKenzie, got the visitors the win with a heartbreaking drop-goal with the clock in the red.

A great show from both sides on a momentous occasion for The Rec ended in 30-31 win for the invitational Barbarians.

Bath will now look ahead to their Premiership Cup game away at Exeter next weekend and their clash against Harlequins in the Gallagher Premiership on 2 December.

As voted for by the fans, Tom de Glanville and Damian McKenzie picked up the Pol Roger Performances of the Match awards. 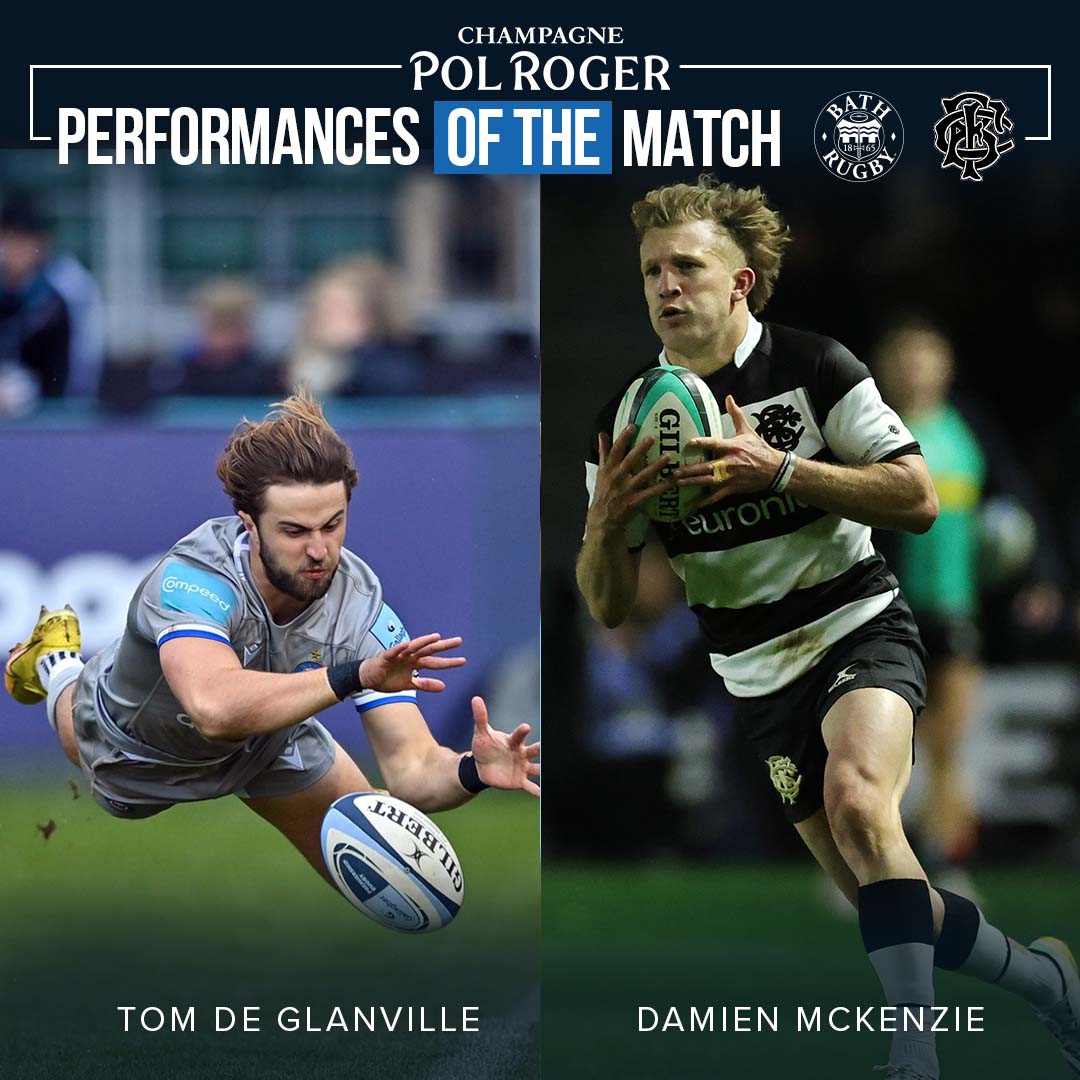