The Blue, Black and Whites found themselves 24-5 down at the interval with Semesa Rokoduguni scoring, but a superb second-half turned the game on its head.

Siva Naulago saw red for Bristol in the first period and Bath capitalised as Jonathan Joseph, Taulupe Faletau and Joe Cokanasiga earned a try bonus point whilst levelling the match.

Callum Sheedy kicked Bristol back in front, however the derby went the way of Bath as de Glanville found himself in the right place to finish at the death.

Sam Underhill and Faletau returned from illness and international duty respectively to partner homegrown captain Josh Bayliss in the back row.

Rokoduguni was back following suspension with Jonathan Joseph coming back into the midfield.

Bristol made five changes from their win over Wasps. Naulago was available after a two-match ban and Oscar Lennon made his Premiership debut from scrum-half.

All sides of the Rec honoured a legend of both clubs before kick-off with a minute’s applause honouring the passing of Malcolm Pearce.

Bristol got proceedings underway with the noise at a high and it was the visitors who struck twice in first six minutes.

Thacker was credited with both scores, going over from the back of a maul in the left, and then right, corner.

The away midfield were strong in defence as Bath got their hands on the ball for the first time with Tom Doughty using smart footwork to make ground and Mike Williams crashing hard on a short line.

But Bears regathered possession and a flowing attack ended with Naulago going over on the stretch.

Bath struggled to land a punch on their opponents but young lock Ewan Richards cantered through a hole to make almost 50 metres before Bristol slowed the ball down at the breakdown and then prevented a two-on-one on the outside with a deliberate knock on.

From there, pressure continued to be applied and following a powerful Will Butt carry from his wing, Thacker was sent to the bin for a cynical infringement.

The Blue, Black and Whites were then held up as Butt’s leg drive saw him reach the line from a Richards tip.

Bristol were reduced to 13 moments later as Naulago made contact with Butt’s head and was sent off for his actions.

With a two-man advantage, Bath did get on the scoreboard and made their time in the red zone count. Hands out the back found de Glanville and the full-back released Rokoduguni on a trademark sprint to the whitewash.

Sheedy closed the half with a penalty to once again extend the visitors’ lead to 21 points.

Joseph then punched hole to release Underhill and when the England international attempted to find Ben Spencer, Sheedy patted the ball down and received a yellow card for his troubles.

Back to two extra men on the field, Bath made Bristol pay. Rokoduguni lost his footing as he aimed to grab his second, but a sweeping phase of play resulted in centre Joseph dotting down.

Soon after, it was a five-point game. De Glanville, so graceful in the air, pounded forward and set Cokanasiga on a charge. When he was hauled down by a scrambling Bears defence, scrum-half Spencer whizzed in to send Faletau over from close range.

Bath put their foot to the floor and Bristol looked uncomfortable as they had to defend deep. Will Spencer put in a massive performance when he arrived on the pitch, proving a menace in the maul.

Cokanasiga wrapped up Ioan Lloyd in-goal and was unfortunate not to be on the scoresheet to level the game as his foot brushed the touchline as he dived into the corner.

Gloucester loanee Joe Simpson and Cipriani hounded Bears with some impressive defensive efforts and the former blocked a kick through to take Bath back up to the away 22.

It was there the home side camped for a prolonged period and Cokanasiga finished acrobatically to make it 24-24.

Bristol hadn’t had much of the possession but when Radradra did manage to break, Sheedy was presented with an opportunity to put them three ahead going into the closing stages.

In the early part of the campaign, that may have confirmed the result, however Bath didn’t know when they were beaten and secured victory with the clock in the red.

Replacement Bristol scrum-half Theo Strang received a yellow card for taking Bayliss out off the ball after Richards barged his way towards the promised land, and after a few phases, de Glanville caused the Rec to erupt. 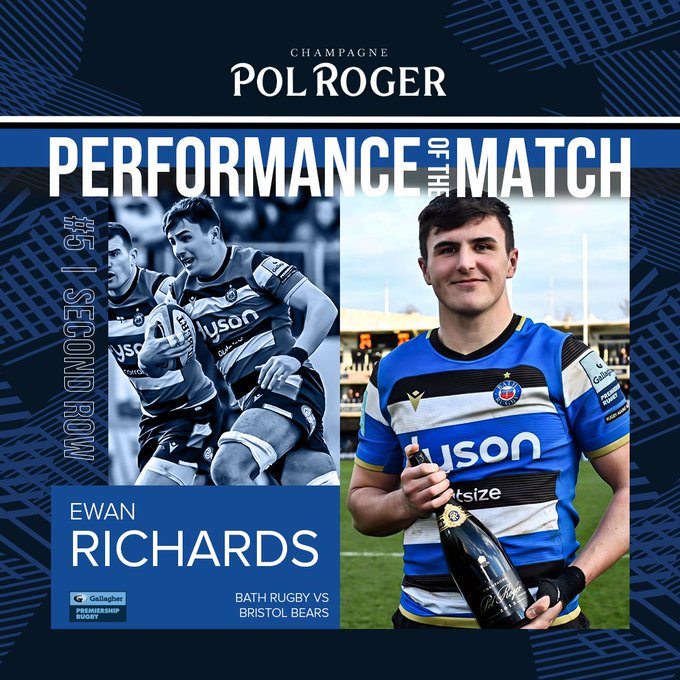 Join us for our double header on Saturday 26 March

✅ Live music
✅ Two games for the price of one!

Get your tickets now before they sell out!

Match underway between Bath and Bristol.

Ratu Naulago sent off for Bristol.