All Premiership Rugby clubs pride themselves on the work they do within their community, and Bath Rugby are no exception.

As part of their commitment to the local area, the Blue, Black and White work with the Bath Rugby Foundation, which aims to empower vulnerable children and young people in and around the city.

Every year the Bath Rugby Foundation works with around 3,000 youngsters who’ve had the toughest start in life, focusing on education, inclusion and employability, and in Joshua Kemp (pictured) they have a very special story of someone whose life has been transformed. 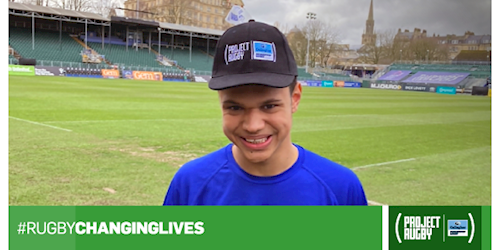 Josh joined the Bath Rugby Foundation back in October 2019 when he took part in a six-week Project Rugby mixed ability programme at his school.

It was a tricky period for the teenager, who was struggling to socialise or gain new skills and confidence in an educational environment since he and his family had recently made the move to Bath from the south-east.

Project Rugby, which is run by Premiership Rugby in partnership with Gallagher and the RFU, aims to increase participation in the game amongst underrepresented groups through sessions delivered by community staff at each of Premiership Rugby’s 13 shareholder clubs at more than 200 locations across England.

Through Project Rugby Josh has gained new skills in rugby and confidence in physical activity as a whole, while he has worked to build relationships with both his peers and the Bath Rugby Foundation coaches. He has since gone onto become a retained playing member at his local rugby club, Walcot Warriors, and has become a regular, well-liked and valued addition to the group.

When Josh started at Bath, he was shy and often would not speak but through the work of coach Dan Hine and other members of staff, Josh has been able to join in conversations with peers at rugby sessions.

Josh has gained so much confidence that his dad now feels comfortable enough to leave him on his own for the first time in 17 years, with his new-found confidence giving him the foundations he needed to build friendships outside of school.

Josh is one of the inspirational young people that we will be turning the spotlight on across Round 12 of Gallagher Premiership Rugby (5-7 March) when all matches will be dedicated to our award-winning community programmes that benefit around 250,000 people annually.

In a year that has been tough for us all, stories like Josh’s make the hard work and effort of all the community teams across Gallagher Premiership Rugby worthwhile.

Chris Howard, Gallagher Development Executive and Club Liaison for Bath Rugby, added: “Josh’s story of how he has thrived in the inclusive and enabling environment of Project Rugby conveys everything we love about supporting this brilliant community programme, and its life-changing potential.

“Having volunteered myself, I’ve seen first-hand how the emphasis on teamwork, the learning of new skills, the power of physical activity and the huge emphasis on fun literally combine before your eyes to build confidence and resilience in the young people taking part. At Gallagher, we can’t wait for community-based grassroots sport to restart so we can pull on our trainers and support future Project Rugby sessions up and down the country.”

“We couldn’t run it without the vital support we have receive from Gallagher, the RFU and of course our clubs who bring it to life. We’ve engaged thousands of participants each year through the delivery by community staff from Premiership Rugby clubs, providing accessible opportunities for people to participate in the game at a time and place that works for them. We look forward to introducing many more to the sport we all love.

“Project Rugby succeeds because it engages and develops new audiences through rugby and stimulate a lifelong interest in the game and Josh is the perfect example of this."