About Bath Rugby Community: We are committed and proud to use the power of rugby and the brand of Bath Rugby Club to deliver high-quality, accessible opportunities that inspire the next generation of rugby players, as well as supporters.

In 2019, we will be posting the highlights of our work within the Community each month to keep you up-to-date with all delivery at a grassroots level. February has been an extremely busy month for our Bath Rugby Community Team, with some incredible work being carried out across Somerset, Wiltshire and Dorset.

The programme was launched within Lacock C of E, Christchurch and Shaw Primary Schools this term and we are proud to be delivering these sessions across 10 schools within the local catchment area. It’s fantastic to get this programme up and running, we’ve already received some incredible feedback from the schools including the below feedback from a pupil at Shaw Church of England Primary School:

“I am going to miss Bath Rugby because they have made Thursday my favourite day. I want to do Attacking Maths even when Jack (Community Coach) has gone”

During the February half-term, the Bath Rugby Community coaches delivered coaching sessions for 190 children across Somerset, Wiltshire and Dorset. Based at Oakmedians RFC, Trowbridge RFC and The Rec, grassroots rugby played turned up in their numbers with varying ages and abilities. Players who attended The Rec camp were especially pleased, when they discovered they would be meeting the entire first-team squad. We were lucky enough to experience incredible weather throughout the week and once again, we’ve received some great feedback from parents and the kids themselves. 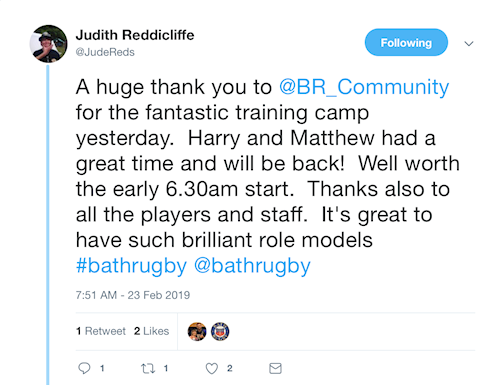 To book your child on an upcoming camp, skills clinic or residential, please click here.

Earlier this month, we launched a new Premiership Rugby programme called Move Like A Pro. This programme is designed to promote an active and heathier lifestyle for adults based at work. Bath Rugby have teamed up with Thatcher’s and the local community in Winscombe offering the sessions to staff at Thatcher’s HQ and Sidcot School. This isn’t about putting Thatcher’s staff in the middle of a scrum, but using the sport we love to get everybody inspired and on track to a healthier lifestyle!

Sherborne Rugby Club brought over 70 children from their minis for the Bath v Newcastle Falcons match on 16th February. All children took part in a training session on the Recreation Ground outfield with our coaches, ahead of an insightful Q&A with Anthony Perenise and Kahn Fotuali’l. The day didn’t stop there, as the kids also formed the Guard of Honour ahead of the match and pitch parade at Half-Time. Their coach Andrew Landers sent through the below feedback after the match:

“Big thanks to our Bath RFC community team who made our players and parents feel welcome. It was also a great to see we were the only team there so our players benefited on the little extra training with the professionals. We all had a fantastic time in Bath!”

On behalf of Land Rover, a group of lucky kids were invited to an exclusive Community coaching session at Farleigh House. It was a fantastic event in glorious sunshine, which also included a Q&A with Chris Cook, Lucas Noguera and Max Wright followed by a BBQ at the prestigious venue. Don’t worry if you missed out, there is another Land Rover event at Farleigh House in March and we are open to nominations from all local Clubs - click here for more information.

It was a very busy end of term three, coaching over 400 kids across 10 Primary Schools resulting in over 100 hours of delivery. At the end of the term, we held an intra-school competition at Newbridge School allowing all children to showcase what they have been taught across the programme. One of their PE teachers, Andrew Seabourne sent through the below feedback earlier this month:

“The children greatly look forward to Bath Rugby coaches coming in to take sessions. They keep all lessons fun and activity levels high. The children learn key skills through games and are encouraged to make decisions and problem solve for them. The progress the children have made in their understanding of the game after only a few sessions has been remarkable."

We are launching the first ever Bath Rugby Community coaching programme at an all-girls Secondary School, to be delivered throughout term 4. We have already completed our first two sessions, coaching girls from Year 7 – Year 11 and there were some serious skills on show.