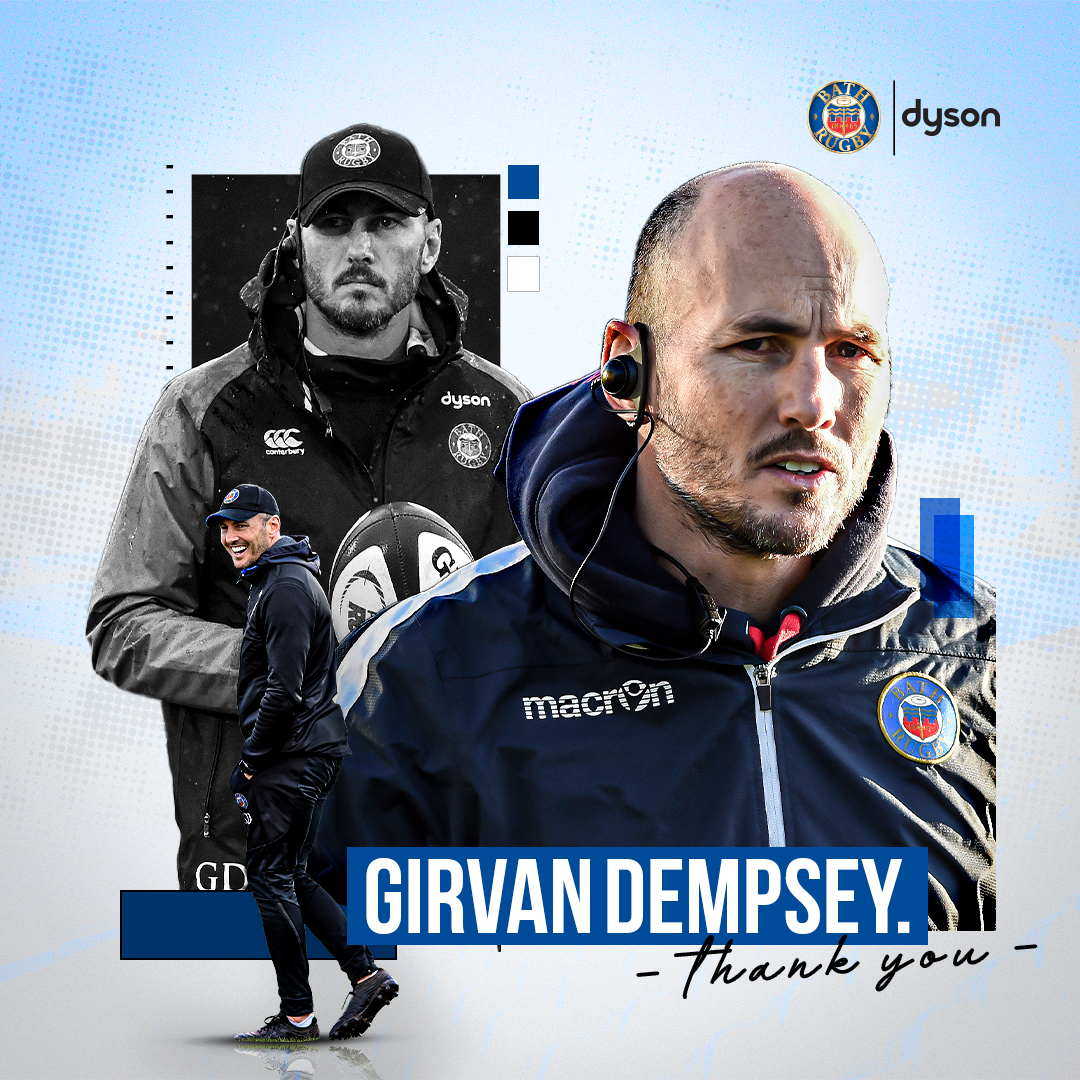 Bath Rugby can today confirm that Girvan Dempsey will leave at the end of the 2020/21 season when his contract finishes.

Dempsey has been a big part of the club both on and off the field playing an integral role in developing young players on the cusp of the international game since his arrival in 2018.

He joined Bath Rugby after having been a key part of the success at Leinster, including in Europe winning the Champions Cup.

Among some of his success stories in the south west, the former 82-capped Irish international is credited with the successful transitions of both Ruaridh McConnochie and Will Muir from Sevens to XVs.

McConnochie’s development under the supportive watch of Dempsey resulted in the winger being named in Eddie Jones’s 31-man squad for the 2019 Rugby World Cup, just one year after joining the Blue, Black and White.

Tom de Glanville and newly internationally capped Cameron Redpath are two further players to benefit from Girvan’s experience, the young backs have gone from strength to strength under his guidance.

Speaking of Girvan, Director of Rugby, Stuart Hooper said: “He is an outstanding person inside and out. I want to thank him for everything he has given to the club in his three seasons with us.

“He, like all of us, is judged on the 80 but it is his attention to detail in the 10,000 minutes that is a true reflection of his character. Girvan will be missed by everyone and we all wish him the success he deserves in his next venture.”

Girvan shared his heartfelt thanks to the players and staff at the club and the loyal blue, black and white supporters: “Bath is a very special place and I’ve really enjoyed my time at Bath Rugby. I’d like to thank Stuart, all the players and staff for the warm welcome they afforded me and my family. I also want to thank our brilliant supporters, who we have sadly missed down at the Rec.

“I leave having forged many great friendships and with a lot of happy memories. I’m really looking forward to a new chapter and I wish everyone at Bath Rugby every success for the future.” 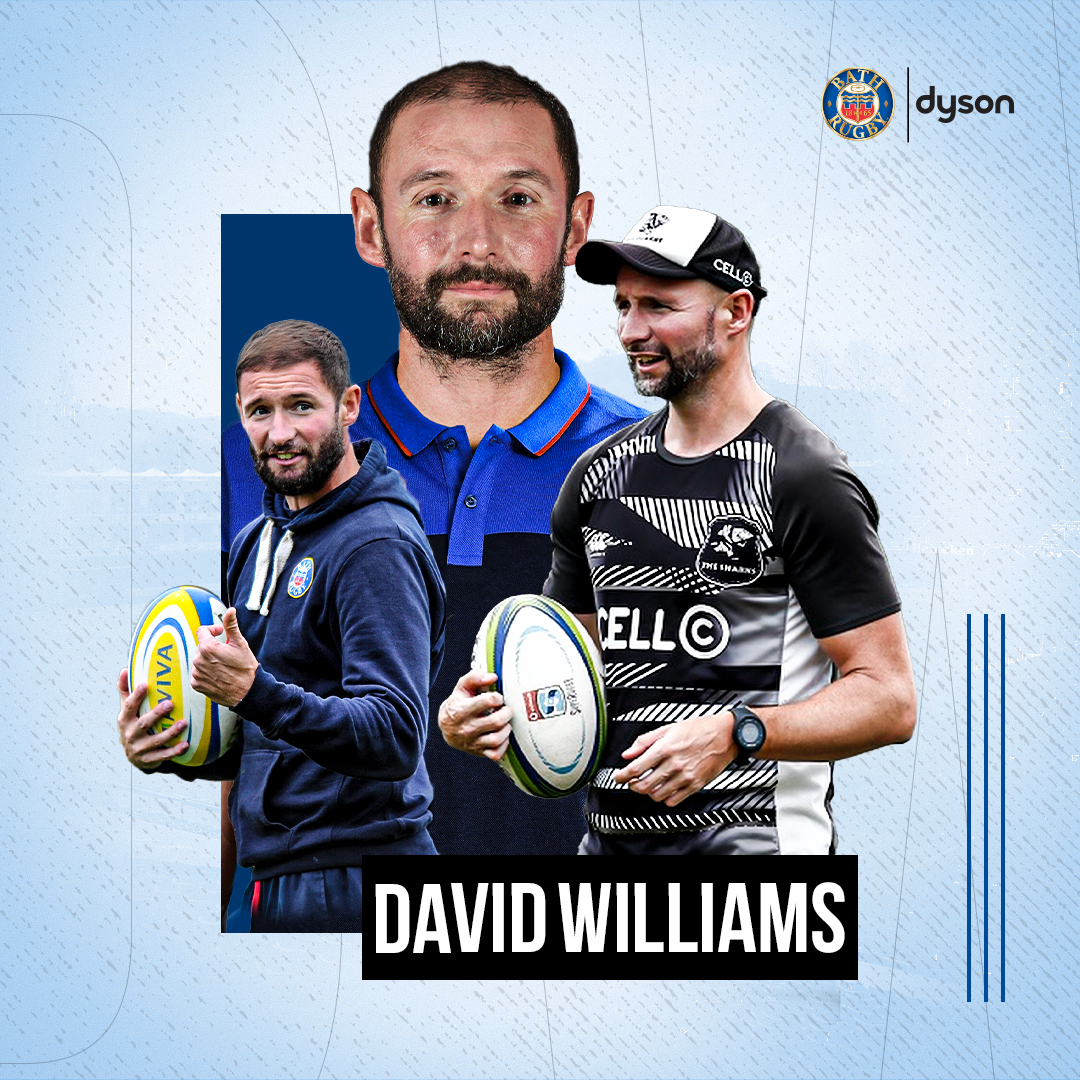 The news of Girvan’s departure paves the way for David Williams, who will re-join the Blue, Black and White as Attack and Backs Coach following the conclusion of the 2020/21 campaign.

Williams, who was formerly Academy Coach at Bath Rugby from 2012-2014, has returned to England following a successful eight-year period of coaching attack within Super Rugby, Pro 14 and Top League.

An innovative attack coach, Williams has a deep knowledge of the game and a real excitement for playing with intent and using possession to pressurise teams. He joins Bath Rugby, after two-and-a-half-years as Attack Coach with one of the most exciting attacking teams in Super Rugby - The Sharks. Before that he held the Attack Coach position for fourteen months with the Free State Cheetahs taking the side to the Pro 14 play-offs during his tenure.

Further to that he developed his coaching capability with the Southern Kings during the 2017 Super Rugby season, which saw the side cause several upsets, and the Kobelco Steelers in Japan’s Top League where he learned from ex-All Black coach Wayne Smith and current Australia Head Coach Dave Rennie.

Hooper continued: “We want to accelerate the growth of our attacking game. We need to make a shift in terms of being clinical in attack, developing our play with ball in hand, playing into space and really challenging the opposition. It is an exciting shift and one that David will add to. I am incredibly pleased to be able to welcome David who we believe will contribute enormously to our environment and to the evolution of our game.

“David is well regarded in his field for his coaching ability and his work with The Sharks attack is clear to see.

"David has a fascination with the detail of a game and a training week, this, alongside his tactical nous and his ability to engage players really set him apart during the interview process.

"David also has strong and trusting relationships with myself, Neal Hatley and many of our senior players following the two years we spent working together, on the back of these relationships we can challenge each other to deliver high quality training weeks that allow our players to achieve their ambitions together and allow our supporters to love watching us play.”

Commenting on his appointment, Williams said: “Having strong family links to the south west of England and having previously been part of Bath Rugby, it feels incredibly special to return to the club, especially after an exciting eight-year rugby journey. I have worked with so many incredible people who have all helped to shape me as both a person and rugby coach.

“The club’s vision, of signing world class talent aligned with its strong commitment to developing players and coaches from within the region makes this opportunity an exciting prospect indeed and it’s a vision I hope to play a role in continuing to grow.

“From my time in 2012-14 to now, a number of players who were then playing on the fields of Dorset and Wilts and Somerset, have now progressed to the Blue Black and White to become the core of the senior squad, this is massive credit to the playing pathways in the region and having followed a number of these player progressions from afar, am excited to reacquaint myself with this group alongside meeting up with the squad and staff at Farleigh House and the Rec.”