Bath Rugby will host Scarlets at the Rec tomorrow night, which will coincide with celebrating the achievements of the victorious 1998 European Cup Final winning side nearly 20 years on.

We asked players and supporters to submit their memories of the fixture, and here are just a few from that famous weekend.

Phil de Glanville - It was 95% French supporters in the Stadium, but those 5% of Bath supporters, they were absolutely magnificent. It’s the best Bath support I had at any game. Most of  the Bath supporters were in one part of the stadium on the corner by the tryline and I just remember immense suport coming from them. 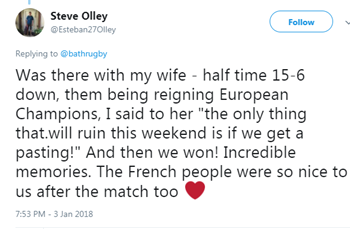 Simon Hird - Listened to it in the departure lounge of a French airport on a very small radio with about 20 other blokes I had never met before, waiting for a ski charter flight back home. Been a Bath fan ever since

Glenn Pitman - The moment the final whistle went we just went wild, leaping around, crying, hugging everyone in the crowd. It will live with me forever. ALLEZ BATH! 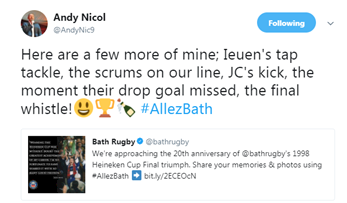 John Taylor - Bath supporters clapped out of the stadium by the Brives supporters and the great night we had with them after the game..That was the Spirit of Rugby. 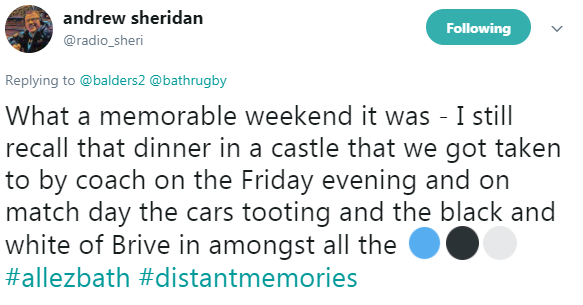 Jon Callard -  The other thing that really made the occasion was how the Bath supporters got into the spirit of the French culture. The noise, the spirit, the banners, the claxons, it was an amazing atmosphere. I can still feel it now walking out through that tunnel to that match - it was surreal. I’ve never experienced anything like it before and haven’t experienced anything like it since.

David Cafferty - I was there - drank too much, nearly missed the coach home, worse hangover in history, hugging anyone and everyone, hospitality of the locals, needed a doctor on the coach back, tolerance of police, stupid songs, convoys of coaches out and back - sooooo many memories!

Tickets for the European clash between Bath Rugby and Scarlets on Friday 12th January (kick-off 19:45) are still available, and can be purchased online here, or by ringing the Ticket Office on 0844 448 1865.